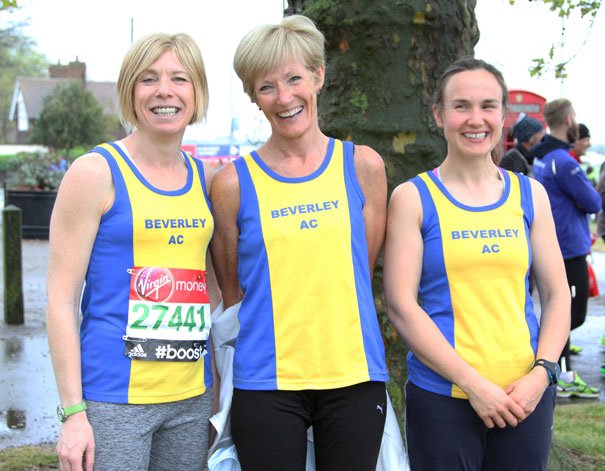 14 runners from Beverley AC joined the 38000 strong field for this year’s London Marathon. Every London is an unbelievable experience but there was a special feeling to the 35th Anniversary race as the sport said goodbye to Paula Radcliffe, who chose to start with the masses for her farewell race.

Each year many of the Beverley team choose to join the trip organised by City of Hull and Beverley AC member Denise Thompson. Beverley join a number of clubs including City of Hull, White City, Barton and District and West Hull Ladies on the coach down with friends and family support, to pick up your number at the Excel Arena and then relax at the hotel to prepare for the race.

The Sun teased those departing from the East Riding on Saturday morning, as weather reports promised potential for a wet day. However, as it turned out, although cool and overcast, there was very little rain during the race and conditions proved to be ideal for running.

And so Beverley’s men and women lined up for the 26.2 miles, discarding their bin liners and old clothes to keep the warmth in during the wait to start, and embarking on the run of a runner’s lifetime. The noise is incessant and the atmosphere electric making the long miles fly by.

The team were headed up by 3 sub 3 hour performances. Ian Boardley’s consistently good times continued as he was first club member back in 2:54:44. This was 1133rd overall and 242nd in the age 40-44 group. Aubrey Morrell felt a bit fatigued but still managed 2:56:22. Darren Rodmell was next.

He has had a great year with consistent improvement in his times and this sub 3 represented a major achievement for him, posting 2:56:34. Timmy Davies has had an excellent season but the Marathon has caught many a good runner out and sadly he broke down in the last 4 miles. Nevertheless, he still came in with a time of 3:20:41.

First Beverley woman was Samantha Allen. Sam felt below par prior to the race and was “only going to jog it”, so getting within 90 seconds of a PB in 3:25:26 gave her quite a surprise! She was 652nd woman overall and 132nd woman in the 40-44 age group. 2nd Beverley woman, Laura Egan, commented on Sam flying past her at mile 23 as though it was the first few miles. Laura could herself be proud of maintaining her high standards, being right behind Sam at the end in 3:26:54, 728th woman overall. Andrew Foster quietly went about his business posting 3:44:52, making him 710th in the men’s 50-54 category.

Pete Watkinson never fails to impress in his favourite event. Now a member of the coveted 100 Marathons Centurions Club, he came 160th in the 60-64 group in 3:53:02.

One of the best Beverley performances of the day went to Jackie Hardman. Although she was disappointed not to beat 4 hours, she was 25th in the female 60-64 section in 4:00:30 and finished in the top 40% of the field overall.

Another great age group performance was achieved by John Boardley in the 70+ men. He was 97th in this group in 5:25:37

Former club member Debs Brant, still an occasional visitor to the club, came over from Cyprus for the race. She fell the night before, crashing her foot into a staircase but managed to get round in a creditable 4 hrs 15 mins in spite of the pain, which turned out to be from a fractured 5th metatarsal when assessed at the East Riding Community Hospital MIU on Monday morning!

Chris Dunn was going well till the cramps got his legs but he still managed 4:24:58. He has run the last few London Marathons for the Meningitis Research Foundation in memory of his father who tragically lost his life to this devastating disease.

Joerg Hardege was delighted to complete in well under his target 5 hrs in 4:50:24
The day was rounded off nicely as many of the Club met up afterwards, with other tired but excited runners, at the Lord Moon of the Mall pub for celebratory drinks before the long return home to Yorkshire.