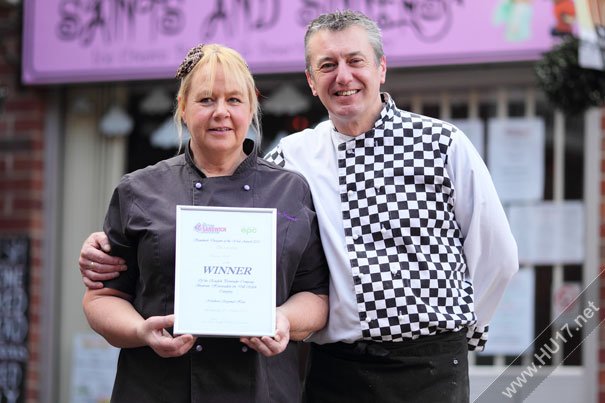 Darren and Dawn Roe who own Saints and Sinners are celebrating after they earned the right to compete for the Designer Sandwich of the Year in London.

Speaking to HU17.net Dawn explained how this little independent Beverley retailer is on the verge of winning a national accolade, she said;

“Darren and I entered a sandwich designer of the year competition and we were semi finalists at the North East Regional heat in Driffield.”

“The British Sandwich Association runs the competition. There are six categories, each with an ingredient nominated by a sponsor.”

“You have to enter at least one category, but you can submit a recipe for each. As long as your recipe includes the nominated ingredient, you are free to use any other ingredients you choose.”

“The sandwich can be toasted, in a bagel, wrap or roll and use any bread of your choosing. The judges mark on commercial viability as well as creativity.”

“We got through with 4 of our sandwich designs and were up against stiff opposition, lots of big companies, like Greggs, Waitrose, Greencore etc not many independent companies got as far as we did.

“In fact The Real Sandwich Co from Hull was the only other competitor from this area that got through to the semi finals but didn’t win anything. “

“We are the only company from East Yorkshire that got through to the final. The other winners came from as far away as Newcastle and Manchester.”

“Our sandwich won in the English Provender Beetroot, Horseradish & Dill Relish category with our ‘Partners in crime’. A smoked salmon and goats cheese sandwich with a sour cream, lemon and dill bread made by ourselves.”