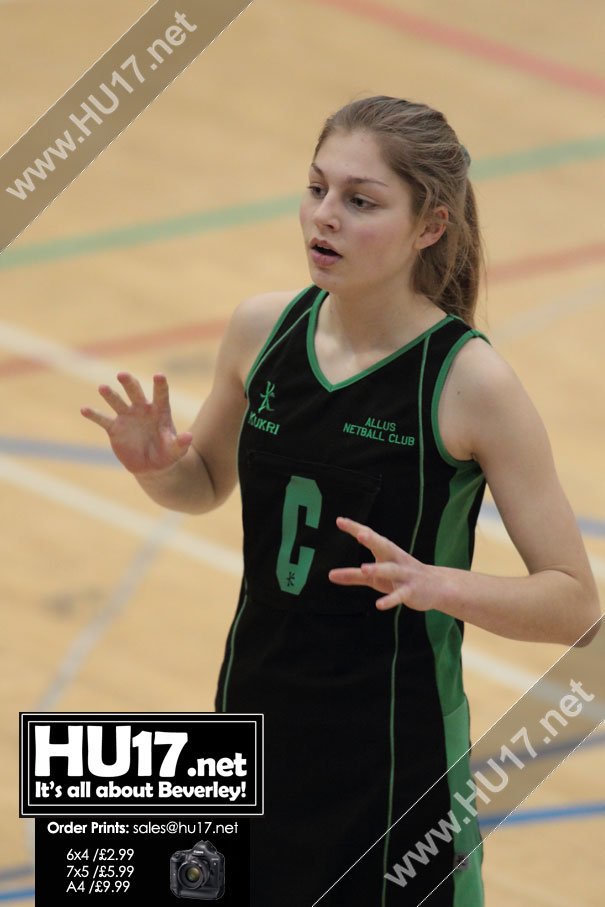 This week saw Allus U14 take on Wakefield Wildcats for their 6th Regional Match at the EIS in Sheffield.

The game began by both teams taking their own centre pass to goal. Allus’ confidence grew through the first quarter allowing them to gain turnover of the opponents centre. Accurate shooting from both Lucy Norton and Evie Moy in the circle against some tough defence allowed Allus to gain a small lead. The first quarter ended 7-4 to Allus.

After a strong start, no changes were made going into the second quarter. There was continued improvement in the centre passing, in particular between Lucy Moir and Lucie Maull, this combined with speed, determination and skill from the whole team resulted in the second quarter finishing 14-8 to Allus.

After a strong first half, changes were made to centre court. Lauren Johnstone came on as WA and Evie Edwards as WD both initially making an impact in attack and defence. However, as the quarter progressed, Wakefield Wildcats caused Allus some problems in through-court play, back line passing and resulted in the attack making mistakes. The third quarter saw Wakefield Wildcats narrow the gap to 4 points ending Allus 18 and Wakefield 14.

Quarter 4 saw Allus step up a gear. Bella Brittain took the transition to WD to WA in her stride playing both positions well. The defensive unit of Erin McCabe and Laura Kelly continued to give Wakefield Wildcats problems gaining intercepts and taking rebounds, and positioning in attack was effective. The whole team played exceptionally well together, and some strong play resulted in a well deserved win.