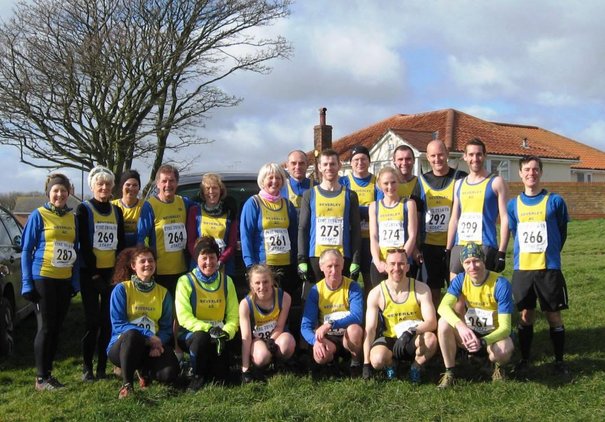 Strong winds challenged runners taking part in the final fixture of this year’s East Yorkshire Cross Country League. Organised by Bridlington Road Runners, the race was held on the coast at Sewerby. Runners were pushed along by a tail wind as they headed away from the start but had to finish their five and a half miles of cliff-edge path, muddy field edges, and two sets of energy-sapping steps, by fighting through a powerful headwind back home. Twenty two Beverley athletes competed in a field of 129 runners, and like last year, the club’s runners won the individual and team women’s races.

Beverley’s Carla Stansfield was first female athlete to cross the line, completing a run of six victories in all the League races. She clocked 36:44, which was fast enough to take 17th place overall. Joining her in the winning female team were Ellen Harrison, who was 3rd woman in a great time of 38:44, and Lucy Stamford who was 17th in 47:26.

City of Hull AC were first men’s team. In the fourth place Beverley team, two runners made it into the top ten places for the race. Relative newcomer Richard Buckle was first for the club, taking 6th place in 35:42. He was chased to the line by Lewis Holloway, who was 7th in 35:44. Next for Beverley were Darren Rodmell who finished in 36:56, Darren Edge (38:52), Dave Morrison (39:25) and Andy Johnson (40:25). The winner of the men’s race was Shaun Pickering (Bridlington RR) who crossed the line in 34:46.

As this was the final race in the 6-race League, prizes were awarded at the end of the event to those who had performed well throughout the winter. Runners’ positions in their best 5 races are used to decide on these awards. Beverley’s runners took several awards. Carla Stansfield was first female athlete overall after her excellent performance all season. Carrie Smith was 2nd in her LV35 age group, and Pam Atkins was first in her LV65 category. Of the men, Lewis Holloway was second overall in the League and first in the MV40 age group, and Peter Watkinson was first in his MV60 class. The overall winner of the men’s league was Danny Durose (Goole Viking Striders). Beverley’s men’s team finished the League in second place overall, behind City of Hull AC. City of Hull’s female team also finished first, with Beverley’s women taking fourth place.