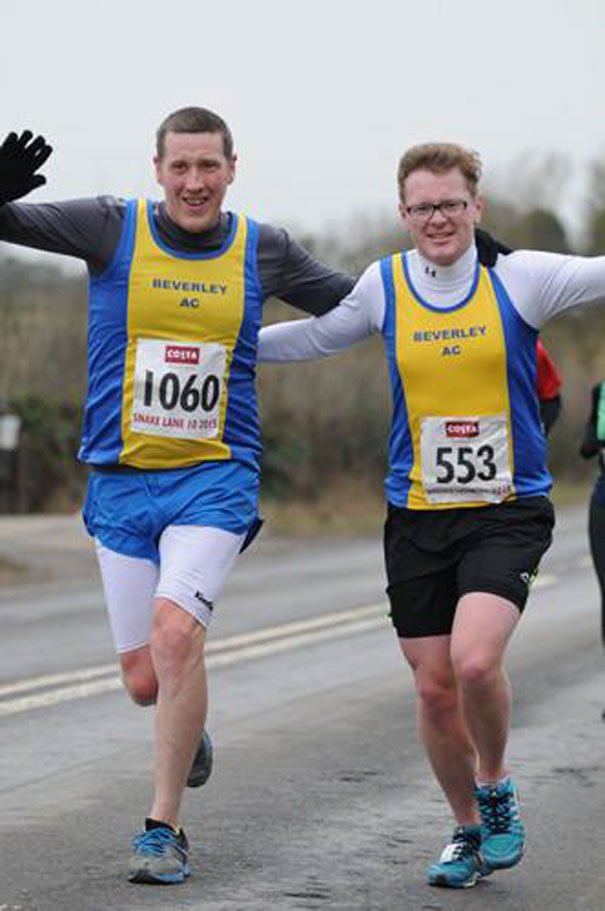 This very popular race, organised by Pocklington Runners, draws a high quality field of athletes from across Yorkshire and beyond. It follows a winding course along undulating country lanes north of Pocklington through the villages of Meltonby, Bishop Wilton, Bolton and Yapham.

Conditions were cold and windy, although the forecast rain held off until the race had finished.

Beverley’s fastest runner on the day was Lewis Holloway, who clocked 59:29 to come in 35th place overall, and taking the 3rd prize for his V45 age group. He was followed by Darren Rodmell, who is using the race as part of his preparation for the London Marathon, and was 65th in 1:01:32, and Steve Ostler who was 157th in 1:03:10.

Andrew Johnson, who finished in 1:06:07, was well over a minute faster than the previous year, while Edward Lisney and Mark Sykes-Cook finished very close together in 1:11:51 and 1:11:59 respectively.

The overall winner of the men’s race was Russ Best (New Marske Harriers AC), who completed the course in a very fast 51:14.

The quickest female runner was Shona Fletcher of Richmond and Zetland Harriers, who clocked 1:00:30.

Beverley AC is looking forward to hosting the one-off Minster Way on Sunday 1st March, starting at 10.00. The race is now full, and participants can check the final details on the Beverley AC website.

This race is organised by Beverley Athletic Club in partnership with East Riding of Yorkshire Council and sponsors Balfour Beatty, Morrisons and Strawberry and will start at the new Lincoln Way roundabout at the Western end of the new Minster Way bypass.

The route will take runners along the whole stretch of the new road, over Long Lane and the railway line, towards a turnaround point near the A1174 at the eastern end. They will then return on the other side of the road to the finish line near to where they started.