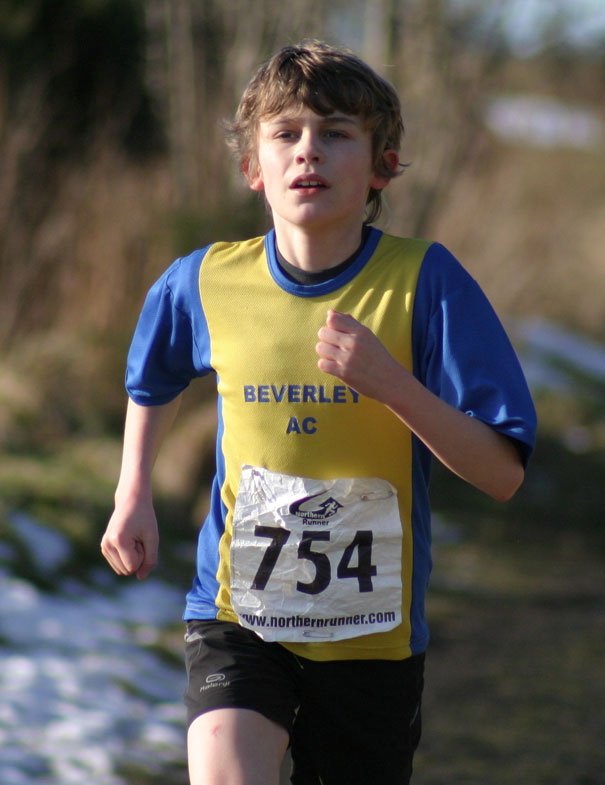 Low Moor is high above Richmond and on a good day has fantastic views north over the Aske Estate towards Aycllffe, east over Teesside and south across Wensleydale, Pen Hill and beyond.

The early morning gave way to a clear and sunny afternoon, perfect weather for competitors, officials and spectators.

The six race programme started with the Boys and Girls Under 11 race, in which Jessyca Tew finished in fifth, ahead of team-mate Blossom Green who in her debut race came an impressive seventh. Erin Glover struggled with a foot injury and finished eighth. Jack Marsay whose performance is noticeably getting quicker ran well to finish in eighth. Ryan Broadbent took eleventh place with another consistent run.

Erin has had a great first winter with the club and was delighted to consolidate her forth position overall in the league and is already looking forward to next year’s XC fixtures.

In the Under 13 boys’ team, Aidan Glover and Guy Harbidge have adapted very well to the older age group after moving up from the Under 11 group this season. They finished in seventh and ninth respectively. In the separate race for girls, Isabella Horrocks finished in twelfth place with a solid performance.

The under 15 girls’ title was to be concluded on the last XC fixture in one of the most closely contested categories. Becky Briggs is a superb talent – with two wins and two second places from her previous four league races. Despite competing in the schools XC race around Barton on Saturday morning she still finished third in her race and second overall in the league with 45 points. Jordan Peacock known to her friends as “Jord” is consistently improving her times finishing ninth.

In the Under 15 boys’ category Beverley AC had 1 athlete, Jonathan Dennison who claimed fourth place with a valiant performance.

Under 17s, Seniors and Veterans all played their parts: Edward Prew was first Under 17 Beverley athlete across the line in 12th place. Kelly Dawson finished in 41st place for the Under 17 women. Nicola Glover continued her superb run with 47th place for the senior women, taking 3 minutes off last years’ time. Mark Dawson was first to lead home the senior men in 60th place, Matthew Horrocks, Jim Harbidge and Neil Sergeant were 63rd, 80th and 110th place respectively.

Report and photos by Alan Glover