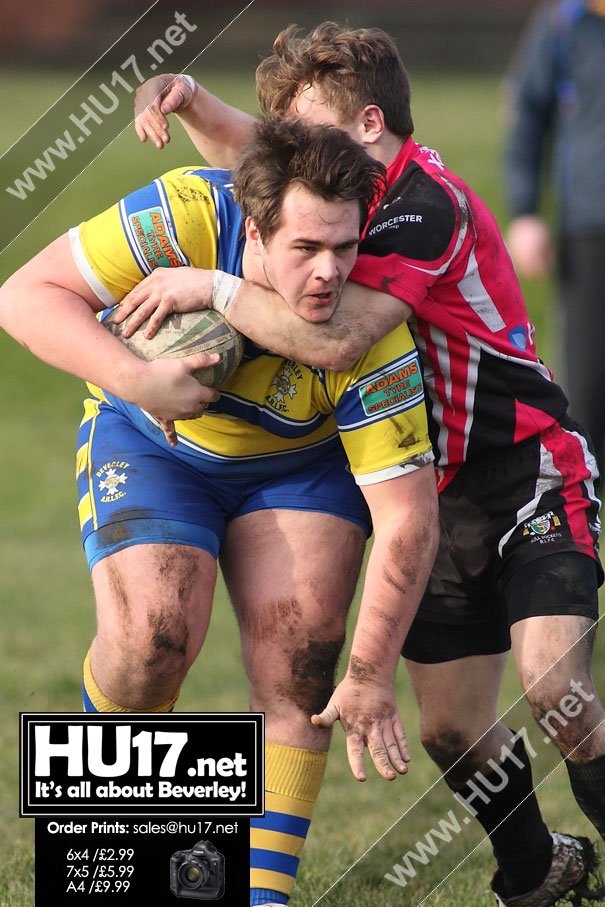 Beverley ARLC lost ground in the title race last Saturday slipping to defeat in a tight and absorbing contest at the Leisure Centre last Saturday.

The weather ensured that this was one of only two Hull & District fixtures to go ahead, and indeed it was just about the only sport taking place in Beverley.

Coach Pat Howdle was forced to re-shuffle the side as injuries to Will Mail and Sam Coleman failed to clear up and Lee Stevens, Jake-Hart Fisher, Lewis Poskitt and Ryan Watkin were forced to withdraw due to work commitments. Sam Ireland got a start at prop,Billy Riby started at scrum half and Harry Bulleyment again got some game time off the bench.

The opening half an hour saw the home side enjoy far the greater possession and territory. They forced a number of repeat sets but found a determined visitor’s defence very difficult to breach.

Hull Dockers looked dangerous on their few raids into the Beverley half of the field. One such flowing movement required a desperate cover tackle from Jack Howdle to deny the Hull outfit a try. Moments later, an interception from Josh Pooley saw him race 70 meters upfield only to be pulled up just short.

A quick play the ball saw the ball shipped to the right to send Alex Nightingale over for a try that was ruled out for an obstruction. Shortly before the break the visitors got on the scoreboard with an unconverted try resulting from one of their few spells of pressure in the Beverley half.

Dockers had much more of the play in the second half and extended their lead ten minutes into the half with a converted try.

Beverley were brought to life, and their reply was almost instant. The re-start kick was fumbled, and the hosts got a set of six on the visiting line straight away. It brought about a movement that saw Jack Howdle feed Craig Morfitt, who in turn fed Callum O’Connor, who scored out wide.

The difficult touchline conversion was added by Jack Howdle. Both sides then traded attacks on each other’s line, but both defences were on top. Dockers did extend their lead with ten minutes to go but Beverley’s reply was again instant. The restart kick bounced straight into touch.

During the resultant set of six man of the match, Rich Etherington charged over for a try on one of those typically bustling runs. The conversion went wide, but the grandstand finish was on.

Beverley had several opportunities to steal a win in the closing minutes but tended to panic at times and cough up possession early in the tackle count. The team looked a little rusty as this was their most competitive game since the Tom Beautiman Cup

Final on January 3rd with a couple of postponements and two very easy victories since then.

This Saturday Beverley are at home to Hull Wyke ‘A’ kicking off at 2pm at the Beverley Leisure Centre.