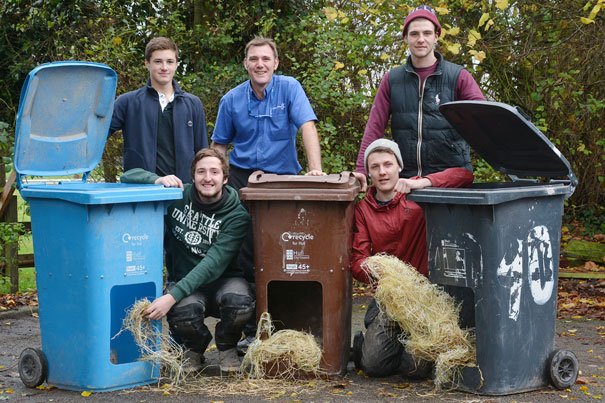 Construction students from East Riding College have been working with a local business owner on a small scale recycling project.

The joinery apprentices have been adapting disused wheelie bins into winter feeders for use in paddocks after being contacted by Hannah Caley from Meaux Livery.

Tutor Craig Leach said: “We were approached by Meaux Livery to adapt the wheelie bins into winter feeders for their outdoor paddocks.

“It’s a small scale project but the work required accurate measurements and cutting and drilling, and the safe use of portable power tools is an important element of the course.

“It’s also good experience for the learners to work with clients outside of the College environment and they were really pleased to be making something permanent that would be well used.”

Hannah Caley said: “We would like to thank the apprentices from East Riding College for creating hay feeders out of disused wheelie bins and old hay nets.

“The hay feeders will be used in our winter turnout areas to feed the horses with minimal waste. Where possible we like to reuse and give old items a new purpose at Meaux Livery.”

She added: “This ethos will be used again when we team back up with the learners at East Riding College to build our Meaux Livery cross country course later in the year, with the children’s course opening in the spring, and larger courses being introduced later on in the year.”

Construction courses starting in January are available at East Riding College in Beverley, Bridlington and Hull.

They include the Level Two Diploma in Civil Engineering at the Bridlington campus, which will gear learners up for site working in housing developments and civil engineering projects.