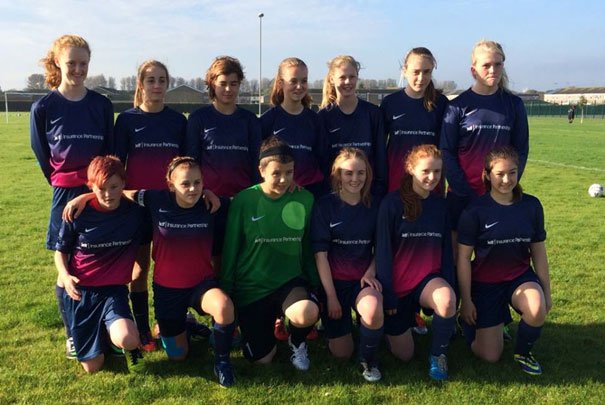 For the second time this season the current National Champions at under 16 (Mill Lane Yellows) and under 15 (Mill Lane Blues) took to the field as opponents in the East Riding Girls Under 16 Football League.

Yellows arrived at the ground as firm favourites with an unprecedented three-year unbeaten record to protect and with no intention of leaving without it. They knew that this could be a difficult tie though as the Blues are the only team to have taken a point from them this season when the two sides last met in October.

Despite playing into a brisk wind it was the visitors who started the brightest with the best of the early exchanges but the Blues defence weathered the early storm well. On 10 minutes, Blues’ Lauren Hartley had to leave the field with a head injury picked up in a collision with the post after heading clear to prevent a certain opening goal for the Yellows.

As the Blues settled into the game, they started to create more opportunities and midway through the first half a Demi Watson corner was met by Nat Bell to net the opener for the younger side. At the interval, it was the Blues who had the all-important goal, but this game was far from over.

With the wind now behind them, the Yellows could certainly see a way back into the game and attacking play from Tonya Wild-Storr and Charlotte Holiday gave the Blues’ defence more than enough to think about, but it held strong with superb performances from Skie Wyatt and Olivia Johnson in the centre and full backs Jess Wright, Imogen Arnold and Cordie Cavill.

As hard as the Yellows pushed to get back into the game, it was once again the Blues that netted for a second. A well worked passage of play saw the ball played out of the defence and through half a dozen quality passes in the midfield of Nat Bell, Abbie Longley, Millie Sharp, Amy Dodds and Kim Ward. A quality through ball set Demi Watson away to go one on one with Leah Shalgosky in the Yellows goal, slotting it into the back of the net to double the Blues’ lead.

As the clock ticked away the Yellows became more and more attack minded knowing that they had to find a way back into this game if they were to retain their unbeaten record. Wave after wave of attacks came but the Blues defence held strong. On the rare occasion that the defence was breached, keeper Billie Davies proved that she was more than up to the job in her first season of competitive football with some fine saves.

With ten minutes to go Blues’ left back Imogen Arnold created herself enough space to play an inch perfect long ball across the pitch to once again release Demi Watson. Watson made no mistake in finishing the third goal to seal what was without doubt the most significant win of the season.

As the final whistle blew the Blues could finally celebrate a great win. This was a day when the score really did reflect the game as on the day the Blues’ showed enough passion, desire and ability to control the game from start to finish and thoroughly deserved the 3 points. Great games, however, need two teams and after the match, both sets of players showed great respect for each other.

Player of the match awards were thoroughly deserved by Nat Bell and Billie Davies for the Blues and Tonya Wild-Storr and Charlotte Holliday for the Yellows.