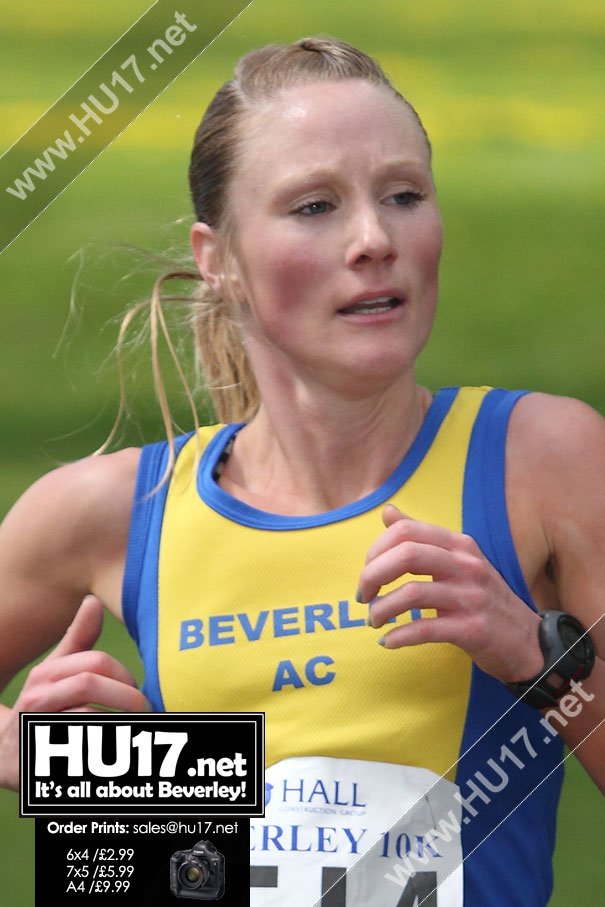 Beverley Athletic Club’s Carla Stansfield was the fastest female runner in the third race of the 2014/2015 East Yorkshire Cross Country League, beating all of her male team mates at the same time.

Stansfield had an excellent race to cross the line of this tough five and a half mile course in 42:28, and her win means she has a clean sweep of all the races in the series so far this year.

Held at Langdale End, on the North York Moors near Scarborough, the race is organised by Scarborough AC. The first half of the run is through deep mud and tree roots alongside a stream; runners then have to ford a stream, climb a steep forest track to the highest point of the race, before finishing on a gradual descent through woods and fields to a final steep downhill to the finish line.

The going underfoot was wet with some icy patches, and there was a strong and cold headwind on the more exposed parts of the course. 25 Beverley AC athletes completed the race, which included a total field of 147 runners.

Stansfield won the women’s race by over a minute and came in 8th place overall, with the second female athlete, Nichola Jackson (City of Hull AC) crossing the line in 43:43. Beverley’s female team included Stansfield, Carrie Smith (61:43) and Alison Stabler (66:28). Beverley’s male team was missing some its faster runners, and was unable to maintain the winning form shown at the previous League race at Drewton Woods. Lewis Holloway was first Beverley man to finish, finishing in 42:52 and taking 10th place. Joining him in the six-man team were Darren Rodmell (43:40); Phil Reese (43:57); Darren Edge (45:21); Steve Evins (45:38) and Dave Millson (45:41).

The overall winner of the men’s race was Andrew Fleming (Scarborough AC) who completed the course in 39:13, and Scarborough AC also won both the men’s and women’s team events at Langdale End. Overall Beverley’s male team is still second in the League table behind City of Hull AC, despite taking only third team place at Langdale End. The club’s women’s team is currently fourth overall, having been beaten into sixth place at the weekend.

The fourth race in the six-race series will be at Sledmere, on Sunday 11th January.