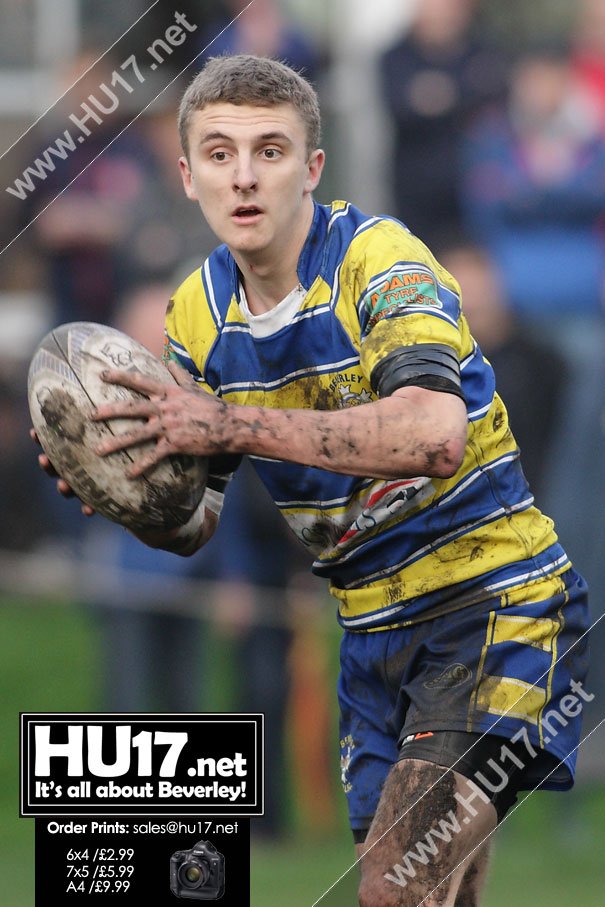 The blue and golds were edged out in this thriller with a try form the visitors just three minutes form time in another very good advert for local amateur rugby league.

The blue and golds looked in control of the match for the opening half an hour of this encounter. Some smart rugby saw the ball shipped swiftly to the right with Anfield heavily influential as usual.

Ben Calvert was on the end of the movement to score wide out. The conversion was missed. The Anfield and Poskitt half back combination continued to cause the visitors problems. Poskitt’s kicking game foced at least two line drop outs and continued to put pressure on the youthful Myton outfit. The hosts made the pressure count when a well weighted kick by Poskitt into the in goal area was pounced on by Steve Connolly to score. Watkin adding the extras.
Beverley began to throw the ball around more and more, which resulted in an interception by the speedy Myton winger who looked certain to score. However, Glen Anfield seemed to come from nowhere to perform the cover tackle of the match. It saved a try, but the visitors were edging their way more into the game and enjoying more possession.

Beverley defended well at this stage and managed to work their way up field for Lewis Poskitt to slot over a drop-goal and extend the lead. Beverley went into the interval 11-0 up.

The visitors started in a lively manner in the early moments of the second half and were on the scoreboard with a try five minutes into the half.

Steve Connolly did find touch with the restart kick straight after, but the resultant set of six yielded nothing. The visitors were gaining in confidence and a kick on the last tackle saw them surround Lee Falcus and steal the ball and score.

Beverley protested that there were two in the tackle, but the try was awarded. The conversion went over, and Myton led 12-11. Myton further extended their lead with an unconverted try to16-11.

Beverley needed some inspiration, and they got in it when Poskitt kicked ahead. Anfield chased as if his life depended on it and beat the opposing wingman to touch down in the corner. Watkin was unable to add the difficult conversion, but he made no mistake with a penalty shot just five minutes later to give Beverley a 17-16 lead with ten minutes to go.

The home defended valiantly in the closing stages and nearly extended their lead when Lee Falcus had a try disallowed in the corner. However, the winner did come from the visitors. Beverley did get one final set of six in on the visitor’s line but could not force their way over. Jake Hart-Fisher went very close.

Man of the match was Lewis Poskitt, who continues to grow in the number seven shirt with his kicking game giving the blue and gold so many other options.

Beverley are away to Fenners this Saturday kicking off at 2pm at Marfleet Lane. Meanwhile, the date of the Tom Beautiman Cup Final is Saturday 3rd January against Hull Dockers ‘A’ at Haworth Park.