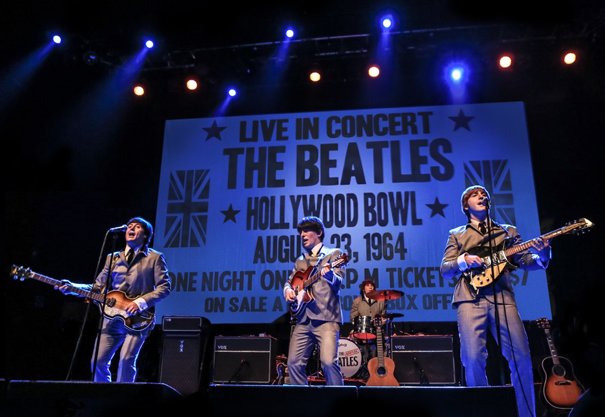 The world’s most acclaimed Beatles tribute band, The Bootleg Beatles, are set to visit Beverley for the first time in history.

With six appearances at Glastonbury Festival, several world tours and many sell-out shows at the Royal Albert Hall already under their belt, the band will be taking to the stage for a pre-festival warm up to Beverley Folk Festival on Thursday 18 June 2015.

Not only will it be the group’s first time in Beverley, it will be almost 20 years since they played in Hull, where they appeared at Hull City Hall in 1996.

Musical credibility and authenticity of the band has seen them play renowned venues, sharing the bill with the likes of Rod Stewart, Elton John, David Bowie, Bon Jovi and Simple Minds; and led to the invitation from Oasis to perform at their massive outdoor events.

The foursome will be bringing their orchestra to perform songs from Sgt Pepper’s Lonely Heart’s Club Band, managing to reproduce live on stage songs that the original band never actually performed live themselves.

“This is a fantastic curtain-raiser for Beverley Folk Festival and we’re looking forward to welcoming the group to the stage as a pre-festival warm up. A rare opportunity such as this one to see the World’s top tribute band will mean tickets are expected to sell fast.”

Beverley Folk Festival, which will take place from the 19-21 June at Beverley Racecourse, is a family friendly festival which brings the best in folk music and much more, offering a weekend of memories for young and old.