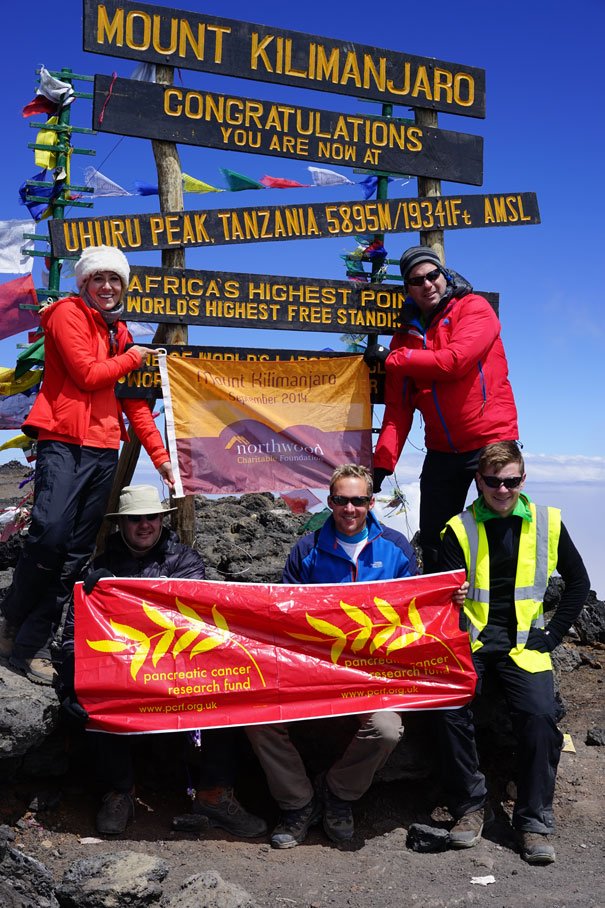 Five novice climbers from Northwood, a leading UK estate and letting agency with over 80 offices nationwide, have scaled Mount Kilimanjaro to raise money for the Pancreatic Cancer Research Fund.

Upon reaching the peak of Africa’s highest mountain, Team Northwood sent a message back home reading;

“Team all made it to the summit! We climbed for NINE hours – SIX of which were in total darkness.  We watched the sunrise.  It was the toughest thing ever.  Now another 5 hours descending.  We are all absolutely shattered!!”

The climb started on September 26 and was in aid of The Northwood Charitable Foundation which was set up in honour of their former Managing Director Nick Cooper who sadly lost his battle with Pancreatic Cancer last year, at the age of 50.  The Foundation has already reached its £15,000 target and the team are hoping that this figure will continue to climb.

“The entire Northwood network is behind the team and we are all delighted that they made it to the summit safely.”

“However, this is not the end of the activities, it is just the beginning.  We aim to raise £20,000 to celebrate and coincide with Northwood’s 20th birthday!”

“We believe that supporting worthy causes is an important part of our culture as a company while also maintaining the legacy and memory of our late colleague and friend, Nick Cooper, who sadly died of pancreatic cancer in August 2013.”

Each year the Foundation will support a charity that the full Northwood network of over 500 people will raise funds for.  This year’s chosen charity is the Pancreatic Cancer Research Fund, whose mission is to fund world-class research into the disease leading to the development of a test for its early detection and diagnosis and more effective treatments.

Just three in every 100 people diagnosed will live beyond five years.  This is the worst survival rate of any common cancer and has barely improved in forty years.

A Northwood Charitable Foundation Just Giving page has been set up and donations can be made at the following address www.justgiving.com/Northwood-Charitable-Foundation

To find out more about Northwood and how they could help you in selling or renting your home please visit www.northwooduk.com