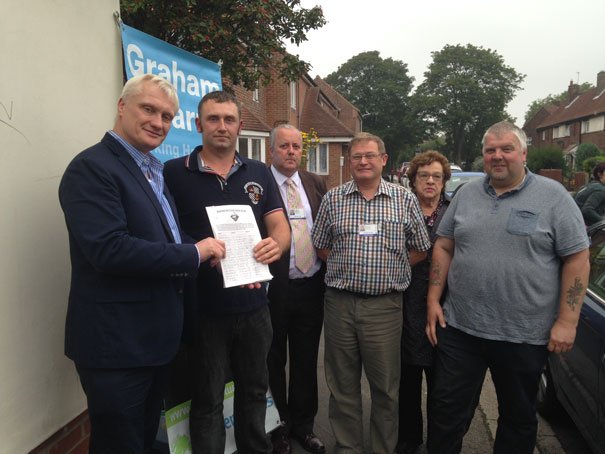 Graham Stuart, Member of Parliament for Beverley and Holderness held one of his regular drop-in surgeries at the Cherry Tree Community Centre in Beverley.

At the surgery he was met by members of the Swinemoor Flood Action Group who presented him with a copy of a petition from local residents to East Riding of Yorkshire Council asking them to investigate problems with the drainage system in the area.

The petition, which has been signed by over 400 residents will be presented to Council’s Environment and Regeneration Committee next month by East Riding of Yorkshire Councillors, David Elvidge, Elaine Aird, Kerri Harold and Dominic Peacock.

Commenting about the petition Graham said;

“I fully support this petition from the residents of the Swinemoor area. Residents told me how anxious they become when it rains heavily, as there is a dread it will flood again like it did in August when the roads and people’s gardens were submerged; and at least one house was flooded as well. ”

“We need a drainage system that is fit for purpose and I’ve written to the Chief Executive of Yorkshire Water and the Director for the Environment and Neighbourhood Services at the Council to urge them to work together to come up with the solution to the problem.”

“Local people are really worried about the problems with the drainage system and we want to see swift action to get it resolved as people do not deserve to live in fear of being flooded each time it rains.”

“East Riding of Yorkshire Council and Yorkshire Water have to work together and take responsibility for the problems instead of blaming other parties, which does not achieve anything. I’m very pleased that Graham’s onside and has added his voice to the campaign.”