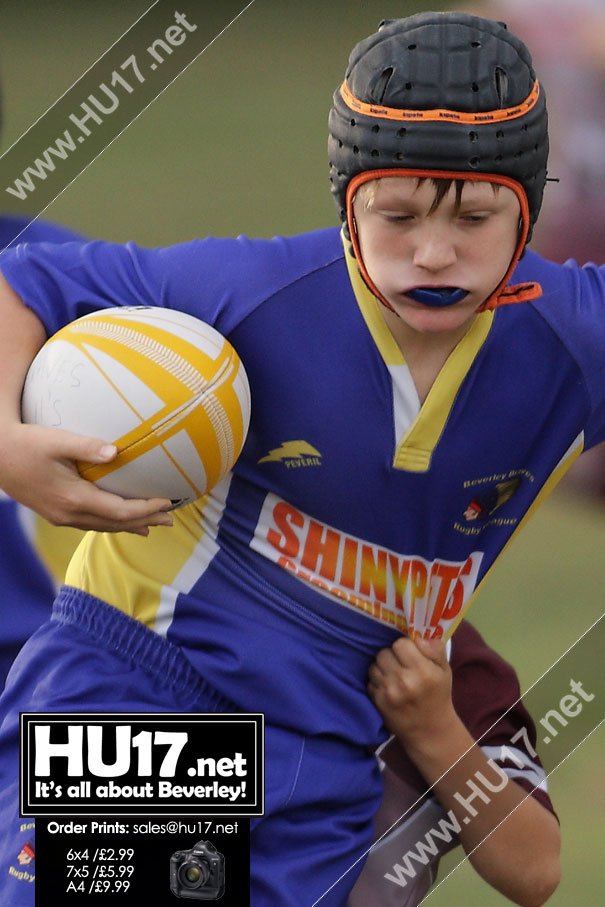 Beverley Braves under 12s put in their best performance of the season with some excellent team work creating six tries in a 32-10 win at Myton Warriors.

Beverley started strongly when the short kick off was taken by George Bennett-Teare, and the barnstorming prop made good yards to put the Braves immediately on the attack. The ball was worked towards the left-hand corner before going through several pairs of hands across field, Oliver Loney making the final pass to William Wallis to score on the right too far out for the conversion to make it 0-4.

Beverley continued to play some enterprising rugby with the halves, Marcus Walker and Lewis Egan, dictating and controlling the play and ensuring the ball moved quickly along the line. This would not have been possible without good service from dummy half Jack Turner and of course hard work from the forwards – Loney and Ethan Rowbotham working tirelessly both in attack and defence.

After a promising piece of play came to an end with a knock on it was not long before the Braves worked another attack down the right, this time Archie Murdoch spotting the smallest of gaps (they do not need to be very big for him to take advantage) to use his pace to score from 70 metres out. Walker converted, and it was 0-10.

Ben Hodder emulated one of his Leeds heroes, Zac Hardaker (on a good day) to field the kick off and take the ball up to the half way line before he was hauled down. With the momentum firmly in the Braves favour Wallis was able to step outside the oncoming defence to score just to the right of the posts and with Turner’s conversion, it was suddenly 0-16.

Thomas Cohen and Tom Newton (the Tom Tom Club) combined on the left wing well, each gaining good yards with their surges and after a William, Kirkup scoot forced a penalty the ball was worked to the left, Turner spotted Newton in space and put him over for the try in the corner. The conversion was missed but at 0-20, the Braves were well on top.

The second half saw a couple of changes in the line up with Henry Hughes, slotting into the pack seamlessly and enjoying the physical battle with the big Myton forwards. Oliver Gresswell went into the second row and Ewan Morton to full-back. Myton are a better side than this score line suggests, and it was no surprise when they scored on the right straight from a scrum after some sloppy play from the Braves to make it 4-20.

Myton were on the attack again when they kicked ahead, Hodder fielded the ball and then raced 70 metres to score under the posts, with Turner’s conversion, it was 4-26 and the win was sealed.
From the kick off Gresswell made a great run up field, one of several good kick returns from the Braves – Rowbotham came up with a cracker in the first half as well.

The Braves were back on top but had two tries disallowed, both finished by the unlucky Bennett-Teare. The first was chalked off for a knock on, the second for a forward pass. That was a shame because it would have been the try of the season with Walker starting off the move, drawing his man and putting Wallis away down the right. The ball went through several more pairs of hands before the supporting Ryan Deane – who had a strong game – passed to Bennett-Teare. This was ruled forward but could have only been marginally so.

Myton scored a second under the posts before the Braves combined again, the ball worked across the line to Wallis, who saw the gap to score on the left. Walker’s conversion completed the scoring to make it 10-32.

Man of the match was a difficult decision, Loney, Hughes, Hodder, Newton, Walker, Wallis and Bennett-Teare were all strong contenders, but Egan’s probing runs and great vision secured the trophy for him.