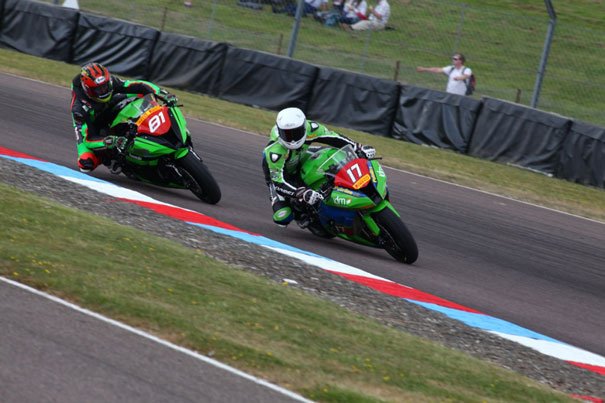 Kevin Van Leuven secured another points finish when he rode to14th place at Thruxton in round seven of the National Superstock 600 on Sunday but unfortunately the two Superstock 1000 riders, Dominic Usher and Tom Fisher were unable to contest their race after it was found there was a breach of the technical regulations.

Once again the G&S Racing Kawasaki Dutch rider Kevin Van Leuven had the difficult task of learning his way around another new circuit. Thruxton is a notoriously bumpy circuit and also the fastest on the racing calendar but Kevin threw himself into free practice and qualifying to start the 14 lap race from a fifth row grid position.

After a poor start which left him down in 19th place Kevin settled into his race and began to mount an assault on the riders ahead and was circulating at the same pace as the top six.

He made progress through to 17th place on lap nine and was embroiled in a battle for position within a large group of riders. Everything came to a head on the penultimate lap when Kevin made his move and he shot past Charlie King and Benjamin Currie to move up into 14th which he held on the drag to the flag to claim another two championship points to take his total to 32 which move him to 12th in the rider standings.

Dominic Usher and Tom Fisher made good progress at Thruxton in free practice and qualifying with Dom taking eighth and Tom 28th place. Both riders were looking promising for the race but a post qualifying inspection discovered the Engine Control Unit was inadvertently switched off and they were excluded from taking part in the race.

“we turned the ECU (engine control unit) off both the bikes for the North West 200 and TT road races and unfortunately I omitted to turn it back on again. There is a new computer system in place at BSB to check the bikes conform to the regulations and I am fully in favour of this.”

“After qualifying Dominic’s bike was pulled in for a routine check and this is when they discovered the ECU was not working. As soon as this was brought to my attention I realised what had happened and told them the other bike would be the same.”

Both bikes then went for further investigation and no performance enhancement was found so although we broke the rules we did not gain an advantage. The ECU is in place to make sure the bike is restricted to less than 186mph on the BSB circuits.”

“But this does not apply to the road races where the bikes are permitted to go faster. For this reason the ECU was turned off for the road races. It is entirely my fault and I unreservedly apologise to the team sponsors and the two riders who were bitterly disappointed to be unable to race today. I also would like to offer my apologies to our fellow racers and to the officials at BSB.”

Kevin realises the need for him to work on his start procedure. He rode well once he got going and brought some championship points back to the team. But if he could get away with the leaders he could be riding for a podium finish as his lap times were on a par with the leading six riders.

Thruxton is a difficult circuit to find a good set up as it is such a fast and technical track. It is the first visit here for Kevin and he has worked hard to learn his way around.

The next round is at Oulton Park next weekend August 10th when the team will be back to full strength and as this is the second visit of the season Kevin Van Leuven has some track knowledge from the earlier race in May.