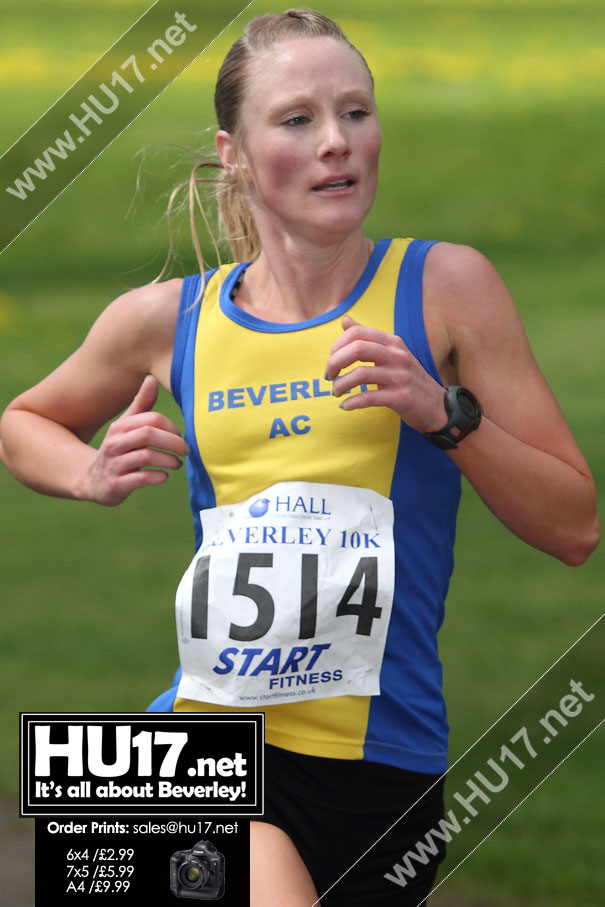 A record field of 676 runners completed the undulating course, which heads out into the countryside from Walkington, returning via Little Weighton, before finishing with a lap of Walkington playing field.

Conditions were excellent for running, with a slight breeze to cool athletes on a warm evening. The race is always well supported with plenty of spectators in both Walkington and Little Weighton out to cheer the runners on.

The Walkington 10k is noted for its friendly and relaxed atmosphere, and after their exertions runners could indulge in cakes baked by Beverley AC members and sold at a stall to raise funds for charity.

Stansfield’s time of 37:33 gave her 15th place overall. She was followed by Tori Green (Ripon Runners) in 38:08 and Louise Foster (unattached) who clocked 39:36, taking second and third places respectively in the women’s race.

In the men’s race, the fastest runner was Michael Hargreaves (East Hull Harriers), who completed the demanding course in 33:49.

Behind him a duel for second and third place between James Pearson (City of Hull AC) and Aubrey Morrell (Beverley AC) took place for most of the race, but on the final part of the course both were overhauled by Mark Smith (Rothwell Harriers) who finished in 35:12, pushing Pearson into third place in 35:40.

Morrell hung on to take fourth place, and was first in the V45 age category in 35:50. Other Beverley AC runners also performed well in their age groups. Morrell was closely followed by Lewis Holloway who was fifth overall and first in his V40 age group, finishing in 35:56.

Also taking first place in his V50 age group was Stephen Peacock, making a welcome return to racing after a period of injury. He recorded 38:54.

Some of the club’s younger runners put in excellent performances. Curtis Arnott was 2nd U18 male, recording 42:32, while Eleanor Boyd and Kelly Dawson were second and third U18 females, finishing in times of 49:47 and 50:05 respectively. They were amongst a total of 41 Beverley AC athletes representing their club.

They included some who were part of a group of 10 runners raising funds for Pancreatic Cancer research, in memory of Andy Julian who died in 2012. His wife, Elaine, commented,

“This is a brilliant race, there is lots of support and cheering which kept us all going on a very hot night. The event helps to raise awareness and funds for Pancreatic Cancer and I would like to thank everyone for their generosity and kindness. It is very much appreciated.”

Other Beverley members recorded personal best times for the distance. Among them was Edward Lisney who recorded 44:55, taking 51 seconds off his previous 10k best.

Before the 10k race, 116 runners took part in a very well supported 1.7 mile fun run, which finished with the same lap of the playing field. They included 15 Beverley AC junior members, who took 5 of the top 10 places in this race, and also provided the boys’ and girls’ winners.

Oliver Douglas completed his run in 9:59, taking nearly a minute from his time in the previous year, and Morgan Dennis recorded an impressive time of 10:19 to come in fourth overall. The younger runners enjoyed completing what was for many their first fun run. Girls and leaders from Walkington’s Rainbows group ran towing balloons, adding to their enjoyment of their event.

The next race organised by Beverley Athletic Club is the second College Canter, which will be held at Bishop Burton College on Sunday September 28.

The event will include off-road races of around 3 and 7 miles. The inaugural College Canter was very successful and this year’s event should build on a race competitors enjoyed last year. Full details are available from the Club website.