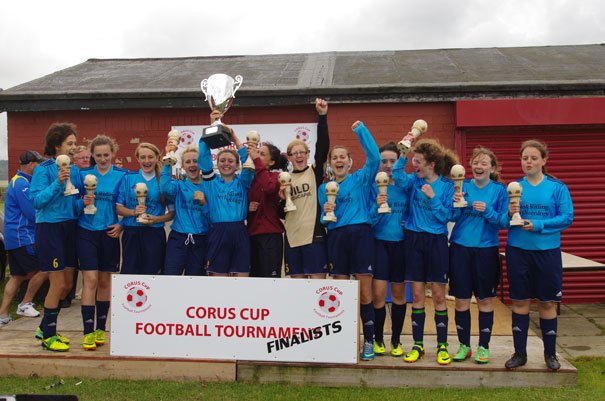 Mill Lane United Yellows travelled north to Redcar for the biggest tournament in the North East the Corus Cup.

Winning all their group games the girls finished top of their group setting up a quarter-final  encounter v North Ormsby.

Two copy cat goals from left midfielder Tonya Storr after surging runs from her own half gave the yellows a comfortable passage into the semi final against Redcar Athletic.

Early goals from Marie Russell and Morgan Nagee game Mill Lane a 2 nil half time lead.  Straight from the restart Redcar scored after a slack pass was intercepted, and the shot found its way into the back of the net making the score 2-1 to Mill Lane.

Buoyed by this Redcar poured forward looking for the equalizer . Despite been under pressure the Yellows held firm until the last few seconds when a dubious decision gave Redcar a penalty which they duly dispatched to take the game to penalties.

Over the years, Mill Lane Yellows have had many penalty shoot out successes and used this to their advantage to progress to the final against rival group winner Cramlington Girls.

The final kicked of in perfect conditions as the strong Cramlington side dominated the first half, and it was only resolute defence that kept the scores at 0 0 at half time.

Credit to the yellows in the second half as they came back into the game without getting that important winning goal.

Despite the efforts of both side the score ended in stale mate and ensured a dramatic penalty shootout  to decide the Corus cup winners.

Penalties were exchanged at 3-3 and the shootout  moved to sudden death.  Every team needs a hero and up stepped goalkeeper Courtney Lees to score the next penalty to give Mill Lane a 4-3 lead with a Cramlington penalty needed to tie up the scores again.

The next Cramlington penalty taker stepped up , but her effort was kept out by a brilliant save from Lees.

Mobbed  by her team mates Lees had ensured Mill Lane Yellows had secured their fifth trophy success of the season as they move on to The National Cup at the  Aces Tournament,  Leicester next week.