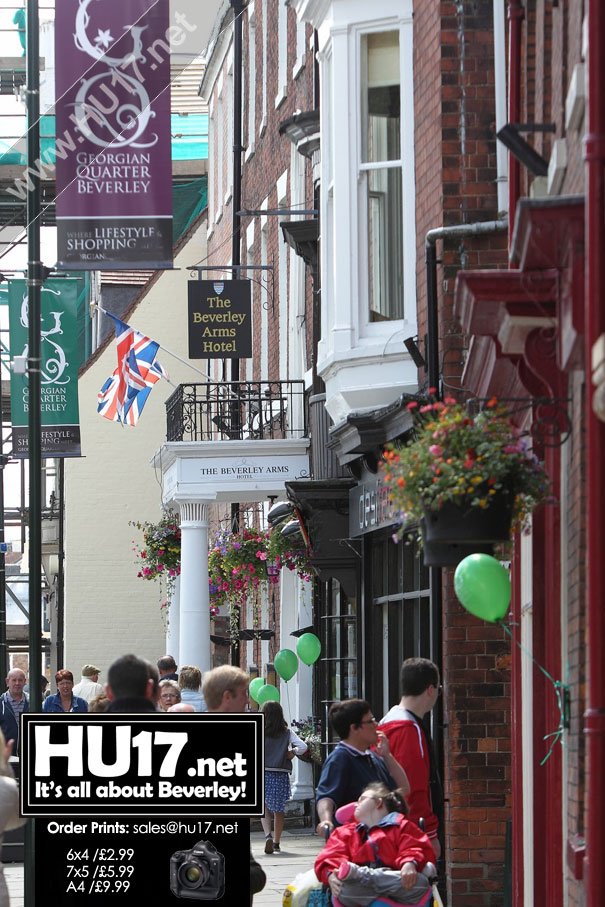 The Beverley Georgian Festival committee has been awarded a grant of £8,800 by Heritage Lottery Fund (HLF) for a project to celebrate the 300th Anniversary of the Beverley Market Cross and succession of George I, it was announced today.

A nine day Georgian Festival is planned in the historic East Yorkshire market town of Beverley. This exciting project will mark and celebrate the 300th anniversary of the accession to the throne of King George I, and also the completion of Beverley’s Market Cross, both in 1714.

The Festival Committee, led by Beverley Civic Society and supported by Beverley Renaissance Partnership and a variety of local arts, history and community voluntary groups has been given £8,800 to develop a programme of events to make the rich Georgian heritage of the town and its influence on the present day better known.

Sharing Heritage is a new funding programme to help people across the UK explore, conserve and share all aspects of the history and character of their local area.

Students more often study the Tudors, the Victorians and the two World Wars than the Hanoverians, but it was the Georgians who brought about tremendous changes in Britain and also worldwide.

Some historians would argue that Britain was made great by the ‘Glorious Georges’, but they are not well known to the public, and no other town in Britain appears to be celebrating the 300th anniversary of the accession of George I.

For Beverley in particular, the Georgian era that began in 1714 marked a golden time for the town. Extensive building provided eye-catching accommodation that can still be seen today, whilst horse racing, gentlemen’s clubs and a theatre attracted rich county families to enjoy the dashing spirit of the period.

Dominating the town centre and in its original state, Beverley Market Cross is a prime example of the legacy of the Georgian era, which is also visible but uncelebrated in many other towns.

“It’s great that we have been awarded this grant and we are extremely thankful to the Heritage Lottery Fund. Beverley is a very well loved town, and we want everyone to know as much as possible about its past, for it is this kind of knowledge that helps us to enjoy it even more.”

“Our programme of twenty-five events that make up the Georgian Festival includes, we hope, something for everyone. Our Heritage Open Day will give people the opportunity to explore an extensive list of Georgian houses, many of which have never been available to the public before, and also to view the two great historic churches in the town.”

“We have a variety of talks, lectures and demonstrations on Georgian themes planned, as well as period dancing, a costume display, harpsichord music by candlelight in our 18th century Guildhall, ‘Fit for a King’ chocolate tasting, and a new play created from a Jane Austen story.”

“I’m particularly looking forward to two very special events, which are the Masked Banquet in Beverley Minster, and a historical re-enactment of the proclamation of George I where it all began in 1714, at the Market Cross in Beverley’s newly refurbished Saturday Market, complete with period soldiers and performers, and a giant Georgian birthday cake.”

Our partners have been generous in their support, including both Town and East Riding Councils. Other events will include a claret tasting session, an exhibition at the Treasure House, an archaeological exploration, a contest between local chefs to make a special ‘Beverley Bun’ recipe using authentic ingredients, and a unique ‘1714’ ale, provided by the local Atom brewery. All in all, it should be a nine day festival to remember’.

Fiona Spiers, Head of the Heritage Lottery Fund, Yorkshire and the Humber, said:

“Sharing Heritage is a wonderful opportunity for communities to delve into their local heritage and we are delighted to be able to offer this grant so that the Beverley Georgian Festival can embark on a real journey of discovery.”

“Heritage means such different things to different people, and HLF’s funding offers a wealth of opportunities for groups to explore and celebrate what’s important to them in their area.”

Graham Stuart, MP for Beverley and Holderness was also very possitive about the Beverley Georgian Festival and the grant they have received, he said;

“I’ve always enjoyed Beverley’s rich heritage, especially the many historical buildings in and around the Georgian Quarter, the town’s fascinating Guildhall and of course the Market Cross.”

“It’s great news that the Beverley Georgian Festival committee have been successful in receiving a Sharing Heritage award from the Heritage Lottery Fund to celebrate and share the town’s past.”

“The Georgian Festival and its supporting events will I’m sure attract a lot of interest, widen people’s understanding of the history of the town, and also help to support the local visitor economy”.