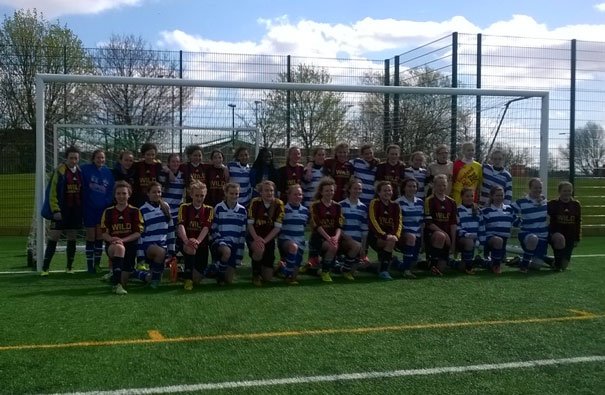 Almost a year to the day the Yellows from Mill Lane United welcomed back their friends from Canada for the annual Trans Atlantic challenge.

Last year’s game was a 3-2 victory to Mill Lane and the visitors from The Quebec Academy from Canada were gunning for revenge determined to finish their tour off with a victory after 5 straight wins. The Yellows for their part were unbeaten in their domestic campaign as they chased another League and cup double, but knew only their best performance would do against their well organised opponents.

On a beautiful spring afternoon, the game kicked off in brilliant sunshine. On a perfect 5g pitch the scene was set for two quality teams to give the spectators a game to remember, and they did not disappoint. The visitors won the toss and kicked off with a slight wind at their backs.It was clear to see from the opening exchanges that the Quebec girls were confident with the ball as they built their attacks from defence.

For their part, the Yellows were closing their opponents down giving them no time on the ball and once in possession created more chances in the first quarter. With winger Tonya Storr causing problems on every foray down the left wing, they should have taken the lead when Storr was brought down in the area only for the spot kick to be saved by the impressive visiting keeper.

The pattern of the first have carried on the Canadian visitors playing the ball around happy to keep possession and the Yellows breaking quickly as soon as the ball was won. Finally, after 25 minutes the deadlock was broken. A fine tackle from captain Emma Johnson won the ball on the half way, quickly releasing midfield partner Morgan Nagee charging deep in the opposition half.

The move looked to have broken down when Nagee was stopped with a superb last ditch tackle only for the loose ball to fall into the path of Mill Lane Yellows top scorer Marie Misty Russell who hit a fine right foot shot into the net to give the Yellows a deserved 1 nil lead.Strikers Russell and hard working Marleigh Hornby kept the pressure on their opponents defence and further half chances were created as Storr and right winger Charlotte Holliday caused problems on every attacking run. At the other end the defence of Jess Pashby, Emily Holliday goal keeper Courtney Lees and the outstanding Amy Radford and Courtney McConville were coping well with the visitors attacks.

The first half whistle blew after a frenetic half of football with Mill Lane Yellows leading 1 nil. The second half started with the visitors desperate to get back into the game, but the Yellows were in determined mood as they turned the screw in a brilliant second half performance. Substitute Courtney Fee was showing up well every time she had the ball constantly probing down the right as Mill Lane continued to dominate.

Pressure finally told when a mix-up in defence saw the ball rebound out to Russell, quickly looking up Russell spotted the keeper off her line, and a deft shot beat the stranded keeper from outside the area for hers and the teams second goal. It was no more than the Yellows deserved. With substitutes Molly Pluves and Lucy Crockett showing up well another goal soon followed as the Yellows looked to put the game beyond their visitor reach. The 3rd goal duly followed hard working Fee was forced wide on the left, cutting back inside Fee found space to cross the ball into the danger area , with the keeper, Russell and Holliday racing towards the ball a delicate header from Holliday hit the back of the net to extend the Yellows lead with 15 minutes to play in a compelling contest.

Credit to the Canadian visitors who kept trying to the bitter end, but Mill Lane United were determined to keep a clean sheet as they battled to the end. The final whistle blew with a 3 nil victory for Mill Lane Yellows with both teams out on their feet after a superb advert for girl’s football, full of grit desire and determination and no little skill that both sides can be proud of. Performance wise for the Yellows quite simply from the 1st to the 80th minute the best of the season as they raised the bar for the rest of the season as they dominated skilful opponents that would have taken advantage of any lapses in concentration.

Man of the matches were given to defender Amy Radford, who tackled well above her weight and winger Tonya Storr, who caused havoc every time she had the ball photo of both teams attached.