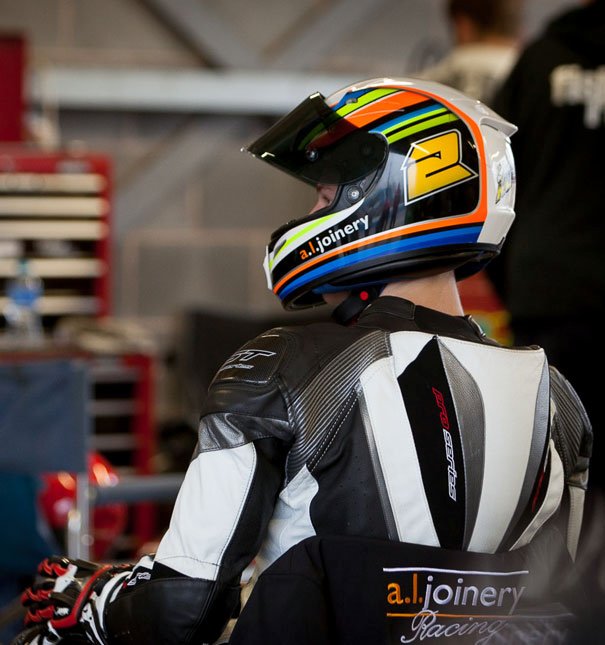 Jordan Rushby returns to action this weekend looking to build on his results from Brands Hatch.

The Beverley rider overcame mechanical difficulties to register his first point in the Thundersport GB 2014 Championships.

Reflecting on the previous meeting at Brands Hatch, Rushby said: “I was disappointed when my bike packed up with a lap to go, but I also felt that I had let the team down, even though it was not my fault.

“Putting everything into consideration and having not ridden that bike before, I was extremely pleased with my performance but I knew I could go faster on the number one bike, which was frustrating.”

Having not had much experience on the circuit, Rushby still reached speeds of over 130 mph, setting a new personal best on the track.

He continued: ” I found the track challenging as I had not had much time on it and had to get to grips with it. My speeds were roughly 137mph but I don’t have speed on my clocks on my bike so I don’t know exactly.”

This Saturday Rushby, who races for the A.I.Joinery Team, will travel to Donnington Park and he feels confident going into the race that all the mechanical issues will be resolved.

He said: “I had a great day at the official BSB test at Donington Park and managed to get a good base setting for the wet that I was happy with.”

“I did struggle to get the bike to stop in the dry and ran on or over shot when trying to brake harder.

“After working through it with Alan, we managed to get the front brake working better for the last session and am looking forward to a few BSB meetings as a wildcard, and trying to get further up the pack at TSGB.”