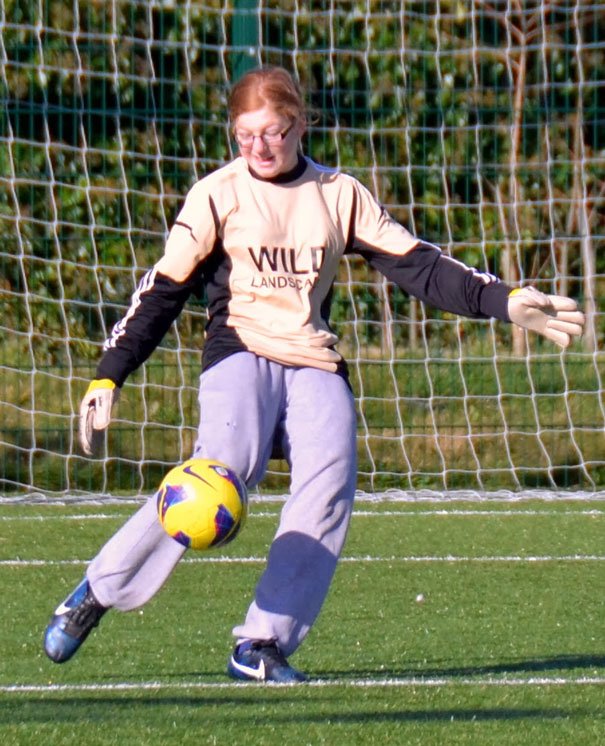 A lovely spring morning saw the top two teams in the U16 East Riding Girls Football League battle for 3 more points in their quest for the League Title.

Both teams were from the Mill Lane United club adding extra spice to an already intriguing contest. Mill Lane were dealt an early blow when Emily Hood injured her hand in the warm up and could not take her usual place in goal.

The game kicked of at a frenetic pace with both sides looking for that early breakthrough, the Yellows were struggling to play their normal attacking football against their older more physical opponents. Mill Lane were winning the 50/50 challengers with Emma Smith, Elizabeth Fitzgerald, Emma Wray and Courtney Fee showing up well as they shut down their high-scoring club mates in the early exchanges.

The Yellows were creating more chances, but the final killer ball was missing as the ball skidded away on the all-weather surface. Both teams were defensively sound with Lucy Crockett, Amy Radford and Emily Holliday for the Yellows coping well with any pressure they were put under. The game was end to end as both teams created half chances.

Finally the deadlock was broken when winger Charlotte Holliday and central midfielder Morgan Nagee combined to get the league’s top scorer Marie Russell free in the penalty area and a clinical finish made the score 1 nil to the Yelllows from Mill Lane after 25 minutes. At this point, Mill Lane were dealt another blow when top scorer Keeley Forward was forced off because of injury to further deplete their team. Credit to the rest of her team mates who dug deep looking for the equaliser.

Probably the games key moment followed 5 minutes before half time. Mill Lane were pressurising the Yellows and midfielder Emma Smith( the stand out player in the local league over the previous 5 seasons) fired a 25yard shot goal bound, off her line caught by surprise Yellows goal keeper Courtney Lees back pedalled and just as the ball was dipping under the bar for an equaliser some how got a hand to the ball for one of the best saves you will ever see in any level of football.

The ball ended up deep in the Yellows territory nearly going out for a corner, what ensued next was a goal of real class and typified everything the Yellows stand for.

With her back to two opposition players winger Charlotte Holliday broke free up the wing, carrying the ball the ball over half way, quick interplay from captain Emma Johnson and Morgan Nagee found the supporting winger Holliday charging forward before hitting an unstoppable 25 yard left foot shot into the top left-hand corner to finish off a length of the field move and give the Yellows a two nil half time lead.

The second half started with the Yellows looking to finish off their opponents and a 3rd goal quickly followed with a fine strike from the edge of the area from impressive midfielder Nagee to make the score three nil to the Yellows. Mill Lane at this point could have given up, but to their credit scored a deserved goal from Jodie Brown after a good right wing run from hard-working winger Courtney Fee. The Yellows did not panick at this point and restored their three goal advantage after a brilliant strike from captain Emma Johnson to make the score 4 1 to the Yellows of Mill Lane with 20minutes to play. At this point, with the game gone Mill Lane started to tire and conceded 4 more goal.

One more from Russell and the outstanding midfielder Morgan Nagee and 2 more giving her a hat trick in the game for captain Emma Johnson to complete her best performance after her return from injury in a tremendous 80-minute performance. The final whistle blew and a 8-1 victory for the Yellows from Mill Lane and 3 more points that’s puts them in the driving seat at the top of the table with 4 games to play.

A tremendous advert for girls football were 8 1 was a bit harsh on Mill Lane who can be proud of their effort with Elizabeth Fitzgerald outstanding throughout the game .For the Yellows one of their best performances of the season when it was needed the most against committed opponents, but ultimately the quality finishing made the difference, Emily Holliday was outstanding in defence, ably supported by the awesome midfield of Nagee, Charlotte Holliday, Tonya Storr, Emma Johnson and Courtney McConville who eventually over powered their plucky opponents.

Man of the matches went to captain Emma Johnson who worked her self to a standstill in a superb 80 minute performance and goalkeeper Courtney Lees for that brilliant save and intelligent ball distribution.