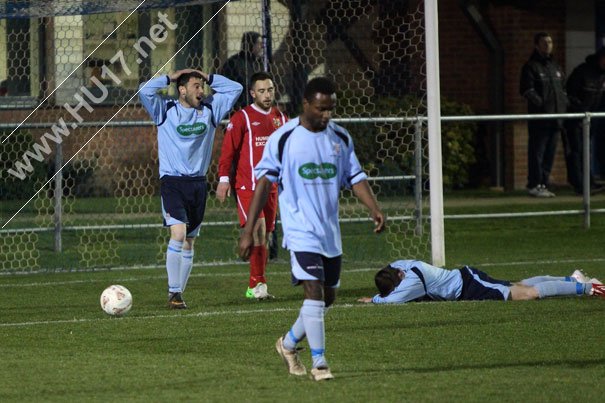 Beverley Town manager Dave Ricardo said he is ‘disappointed’ after his side were beaten by a single goal in the semi final of the East Riding Senior Cup.

Playing a side that are two leagues above them, Beverley were unable to trouble Bridlington Town’s keeper Philip Dobson.

Speaking after the game Ricardo said;

“It is a massive disappointment to exit the cup in the semi final. I am very proud of  the whole squad and very happy with the performance of all the players.”

“What cost us tonight was a lack of composure in front of goal but I could not have asked for anything more from team.”

Playing in a semi final under lights at the Roy West Centre and with plenty of support, Beverley were by no means out classed but were unable to convert any of the chances they created.

In a goalless first half, a well organised Beverley were untroubled by Bridlington and had a couple of chances but never really tested Dobson in the Bridlington goal.

Early in the second half Danny Norton created an opening for himself  but his shot missed the target going high and wide to the frustration of his team-mates. Luke Thompson also had a sniff of goal but again Beverley failed to test Dobson.

The breakthrough came for Bridlington on 70 minutes when Ash Allanson was played into the box and calmly slotted the ball past Beverley’s keeper Adam Nicholson.

Beverley had a good shout for a penalty that was waved away by referee Wayne Grunnill after the ball clearly struck the hand of a Bridlington defender.

When asked about the penalty Ricardo said;

“I thought it was hand ball from where I was; we were never going to get it though.”

Bridlington Town will now face North Ferriby in the final after Ferriby knocked out Hull City 3-0.