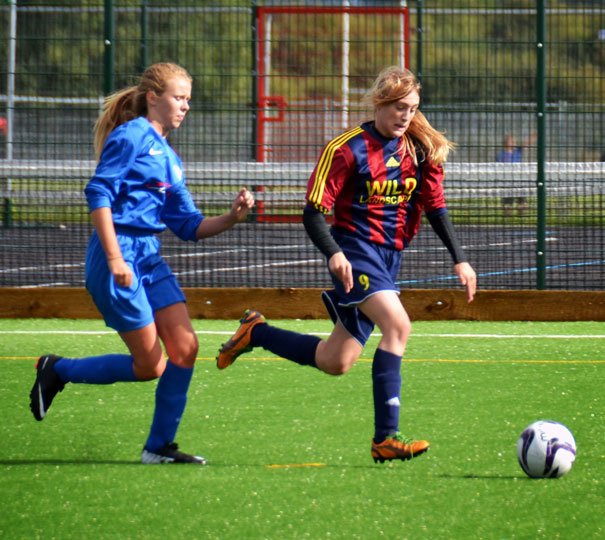 Mill Lane United Yellows went back to the top of the U16 East Riding Girls Football League with a hard-fought victory against well organised opponents.

The game started with both teams trying to stamp their authority on the game on a fine spring morning. Both defences were on top with Emily Holliday, Lucy Crockett and Amy Radford in front of a confident goal keeper Courtney Lee snuffed out any chances that fell to Costello.

At the other end, Costello’s goalkeeper Nicole Gray was in top form as she made some good saves against her high-scoring opponents. Half chances came and went for the Yellows as

Costello chased and harried in a physical but scrappy opening 15 minutes and something special was needed to break the deadlock.

It came in the shape of Mill Lane Yellows winger Charlotte Holliday, with the ball bobbling around just outside the area Holliday came off her wing to hit a superb right foot shot into the top right-hand corner to give the Yellows a 1-0 lead. The game started to become a bit more open as Costello charged forward looking for the equalizer.

The tackles were flying in as no quarter was asked or given, Mill Lane’s central midfield of Morgan Nagee and Emma Johnson started to take control ably assisted by Tonya Storr and the hardworking Courtney McConville and the second goal soon followed.

Nagee was the architect with a sublime over head kick on half way which released striker Marie(Misty) Russell who duly rounded the keeper to make the score 2 0 to Mill Lane. The impressive Emma Johnson was replaced due to injury as the Yellows looked for more goals.

Further chances were created with the hard working Marleigh Hornby and substitute Alice Johnson going close as the half time whistle went with a 2-0 lead to Mill Lane Yellows.
The second half started with Costello trying to get back into the game but with stand in captain Emily Holliday and Courtney McConville standing firm 3 more goals followed for The Yellows.

With Nagee and Storr pulling the strings, The Yellows started to take control. Charlotte Holliday was striking fear into the opposition every time she had possession and duly created the 3rd goal with an unselfish squared ball to Marie Russell after beating a series of defenders on a right-wing run.

With substitutes, Alice Johnson and Molly Pluves working hard Mill Lane Yellows put the game safe, Tonya Storr creating the last two goals, firstly, with a through ball for Russell to give the leagues top scorer another hatrick and the final goal a penalty for Morgan Nagee after Storr was brought down in the penalty area.

The final whistle blew another 3 points for the yellows which takes them back to the top of the table with games in hand on their closest rivals.

Another clean sheet against hard working, well organised opponents that never stopped trying. A physical encounter for the Yellows that the team stood up well to the challenge and good preparation for three tougher games, which follow in the preceding weeks.