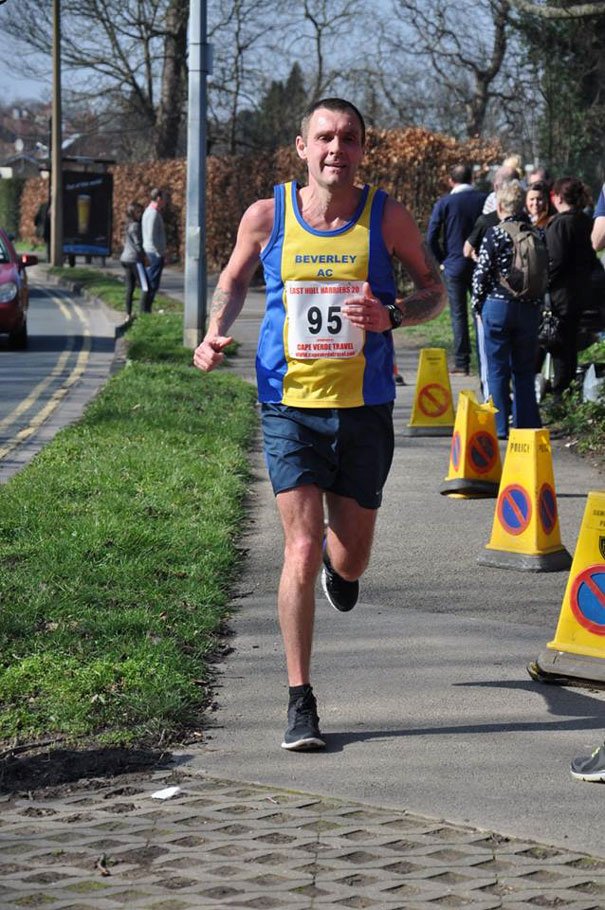 Last Sunday a number of Beverley AC runners joined the field for the East Hull 20 mile road race. This is a popular event for long distance runners from the East Riding and beyond, in particular for its close timing for preparation for The London Marathon, this year on Sunday 13th April. Amongst the Beverley runners were those entered for the London, Brighton and Edinburgh Marathons, including Andy Grainger who is doing Brighton on 6th April and London a week later.

The race starts on Saltshouse Road, then takes a left turn along Holderness Rd towards Bilton, veering off towards Ganstead, and though the villages to Long Riston, taking in part of the Hornsea Rail Trail along the way, before going round a loop through Rise, before retuning back the way you came until reaching Chestnut Farm, Sutton, where you go back up to Saltshouse Rd and back to finish at East Hull Harriers club house near the Golf Course.

This year the race was blessed with the unseasonably warm weather we enjoyed on 9th March, though a pleasant 16C at rest felt a lot warmer when running, which may have caused a number of runners to pull up with fatigue, having spent most of the winter training in extreme, chilling winds and rain. The outward 10 was warm, with a predominantly unfelt tail wind, before the turn of the loop meant running into a moderate and unexpected wind between miles 10 and 12. This calmed as runners joined the return route at Rise. The site of the Rail Trail is always a welcome sign that the back of the 20 mile challenge has been broken and this was very true on Sunday as heat stated to take its toll.

A great feature of the race is the marvellous buffet that East Hull Harriers put on at the end and some food to ease the hunger of a 20 mile hike and a good cup of tea brought a great end to a memorable 2014 race.