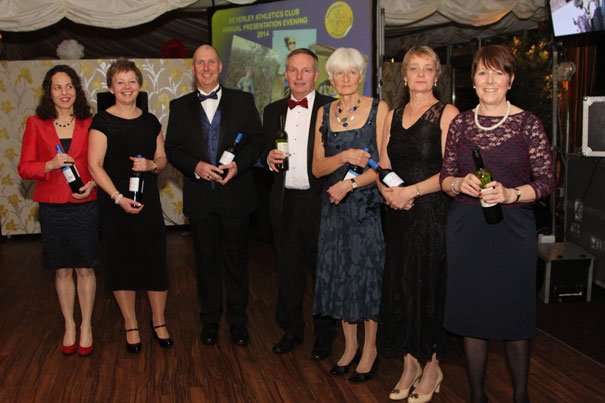 Last Saturday saw Beverley AC celebrate the achievements of its members at the Club’s annual Dinner Dance and Presentation night.

There were some outstanding achievements by all levels of runner and in all ages.

The club’s many competitions, such as the Handicap Series, mini- series and knockout cup, the rankings awards based on fastest times at each distance and even the much coveted ‘wooden spoon’ (or award for noble effort that didn’t quite get its just rewards!) are amongst the prizes awarded.

Leading the way in the awards were Aubrey Morrell and Carla Stansfield. However, many amazing achievements were celebrated on a great night for the club.

Morrell took the prizes for fastest male 10k, 10 miles, half marathon and marathon; a clean sweep!

Carla Stansfield took Club Runner of the Year with some unique and historic performances; never before has a lady won all races in the EYXC league an achievement that will stand out in East Yorkshire running history for years to come.

Fastest Female performances were, at 10k and 10 miles, Carla Stansfield and at half marathon and marathon, Laura Egan, whose performances this year have been consistently outstanding.

Two other member’s achievements brought loud cheers from the audience.

Long-time member Pam Atkins was a highly popular winner of the Handicap Series. Pam has been at the club since its earliest days and has maintained a high level of performance throughout those years. Significant improvement has to be made to win the handicap series and she put in an exceptional year, culminating in this prize.

Oliver Johnston battled with the long-term effects of a horrific car crash in Spain 2 years ago, in which he sustained serious pelvic and leg injuries. Several months in intensive care and rehabilitation in Spain were followed by on-going Physiotherapy and an incredible effort in his rehabilitation programme back in Beverley, where he spent hours in the gym almost every day obtaining the best possible outcome he could, given the extent of his injuries.

It is fair to say many would have struggled to walk far again after such injuries but Olly managed to get round the Beverley 10k in a little over 50 minutes in 2013; an astonishing achievement, which brought a few tears to a few eyes on the day and one which was rightly recognised as the best male race performance of the year.

Best female race performance of the year went to Sam Allen for going under 3 hrs 30 mins at the London Marathon, undeterred by having been left with horrific blisters in the event the previous year.

Most improved female runner resulted in a unique shared prize between Mariana Barbera and Elaine Julian. Mariana knocked an amazing 4 mins 40 secs off her best 10k and Elaine put in a great series of results in the Champagne League.

Phil Reese took huge chunks out of his PBs at every distance. He attended lots of extra club training sessions and started contributing to the club’s team scores in a wide range of events which saw him win the most improved male runner prize.

Most promising female runner went to Meghan Wilson and most promising male newcomer to Matt Ingham, and the 10k Handicap mini-series resulted in a dead heat between Elaine Julian and Catriona Williamson.

The Endurance running award was won by Nick Riggs for winning Rudolph’s Romp and coming 2nd in The Hell on the Humber event.

The fabled wooden Spoon Award was given to Mark Dalton for having put some great results together (including an age grade in one race of 84%) without having won any of the night’s other prizes!

Finally, the club’s Member’s Member of the year award went to Stuart Little who has put in some sterling work whilst obtaining his coaching qualifications. His extra training sessions have made a big contribution to the improved times many members achieved this year.