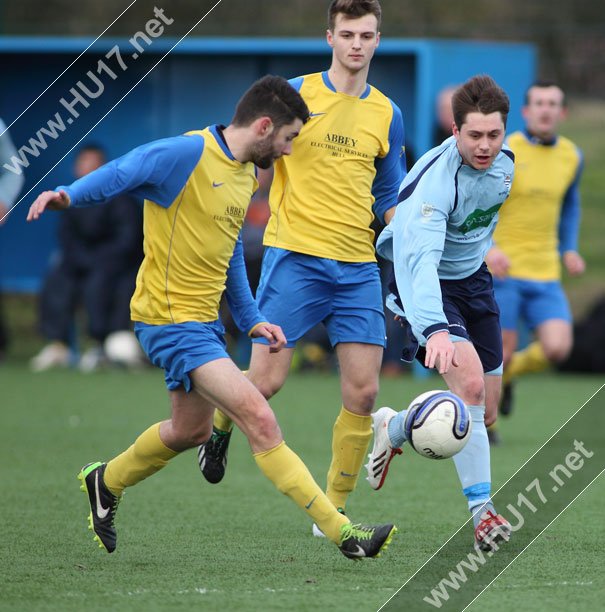 Humber Premier League Champions Beverley Town went into this East Riding Senior Cup quarter-final knowing that an opportunity was there for them to progress and potentially play a team from a higher league than them.

This was a huge incentive, but they knew that they had a very tricky opponent in St. Andrews, who Town had beaten narrowly in the league the previous week.

The champions had to make a couple of changes with Rob Zand replacing Adam Nicholson for his debut in goal, and 16-year-old Jack Tranmer coming in at full back. There was also a welcome return for midfielder Ben Thomson, who has been absent for a month.

It was the home team that probably started the brighter with Beverley not closing the ball down quickly enough and finding the surface and the blustery conditions a little difficult with passes on more than one occasion not finding its target.

St. Andrews took the lead when a ball broke out after a corner was cleared, an exquisite half volley was made, which hit the bar and bounced out kindly to the home team striker who nodded the ball home into the empty net leaving Zand with no chance.

This was the spark that the away team needed, and they started getting a much better foothold in the game, and they equalised 10 minutes later when captain Mike O’Connell drove into the box to drill home his 16th goal of the season.

It was the same player who notched his second when good play from Nathan White, who was beginning to have a key influence in the game, led to O’Connell adding the second.

Town were now beginning to dictate play and making better decisions into a strong wind. Dan Kingsley nearly added a third after a good through ball by White but miss directed his shot.

Beverley came out with the wind behind them in the second half and made one change with Richard Gibson replacing Thomson.
Matthew Start also came on to replace Kingsley, and it was Start who made it three, when Gibson flicked the ball on leaving Start one and one with the goalkeeper, and he finished confidently.

Town were now rampant, and they made it four when good work by Andrew Stott on the left-hand side led to his fellow wide player Danny Norton tapping home from close range.

Stott then jinked his way into the box passed two players and drove home his 15th goal of the season.

The front players of Beverley were now on top form with fantastic movement and creativity and Norton claimed his second with a superb free-kick curled over the wall into the top corner.

The scoring was complete when Stott was upended in the box which led to a rather unfortunate second yellow card for the home team defender, leading to them being reduced to ten men.

O’Connell stepped up confidently to score his hat-trick and his 17th of the season, which a superb return for a player who mainly has played in the centre of midfield this season.

So Town progress into the semi-finals and just one game away from a final at the KC Stadium. They now wait patiently for the draw which could give them a potential game against Hull City or North Ferriby.

Next week, Beverley have a very important league game against Goole F.C, who had a good result themselves this week by beating Reckitts the current leaders of the Humber Premier League.