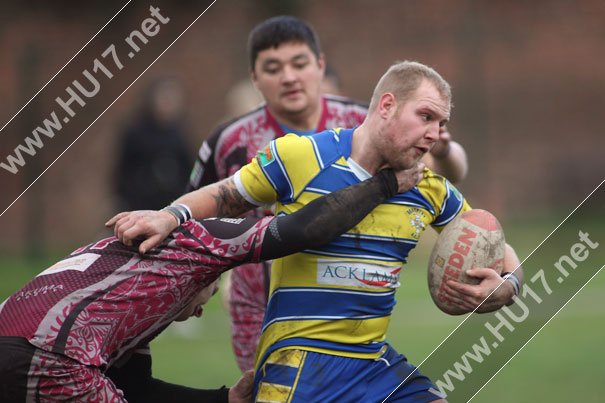 The blue and golds will feel very unlucky to have not got anything out of this match. For seventy minutes of the match, both sides appeared very well matched and a poor last ten minutes by the visitors gave the score line a lop-sided look. Indeed, they led 20-14 with 60 minutes on the clock.

Gavin Proctor was unavailable due to work commitments so coach Guy Adams drafted himself in at hooker, and he also included new signing Liam Preston at center.

The match started with the hosts scoring in a 10th-minute try. The visitors were not phased by this and began to enjoy some long spells of quality possession and territory. They managed to force line drop-outs and repeat sets and indeed got over the line on at least three occasions but were held up and unable to put the ball on the ground. The pressure finally paid off after a strong run from the ever improving Daryl Gregory set up the position. Guy Adams then scooted away from dummy half to score.

This, however, failed to settle Beverley down as the hosts regained the lead with a try. The pendulum did swing back Beverley’s way as they took the lead. A cross-field run from Steve Connolly saw him get a pass away which led to Ben Calvert diving over in the corner despite the best efforts of several Three Tuns defenders. Ryan Watkin added the difficult touchline conversion judging the wind perfectly.

Beverley came out for the second half into the teeth of a strong wind. They dominated the early exchanges of the second half with forwards Louis Hubbard and Will Mail being more than a match for the opposing pack. Beverley got their just rewards 10 minutes into the half. An incisive break by Adams set up the position for Ryan Watkin to go on a jinking run. Watkin then managed to get a pass away which sent Phil hill over beneath the posts. The extras were added on for a 20-14 lead, and a season-changing win looked a possibility. However Beverley failed to capitalize on the situation which saw the home side starting to panick and give away penalties for ball stealing and lying on. They let their opponents off the hook.

The home side got on level terms midway through the second half and took the lead with 12 minutes to go. Even then there were chances. Man of the match Louis Hubbard made a break down the right flank. He managed to get a difficult reverse pass away to his winger Lee Falcus. Falcus was unlucky not to hold a pass that was almost certain to see him go in for a try and take the ball in nearer the posts.

With that chance gone begging, Three Tuns added further two late tries late on, which gave the score a flattering look.
Beverley ARLC are away to second placed Hull Wyke ‘A’ this Saturday. Coach Guy Adams will be looking for the same level of commitment with a little more composure. Kick off is 2pm at Cropton Road.