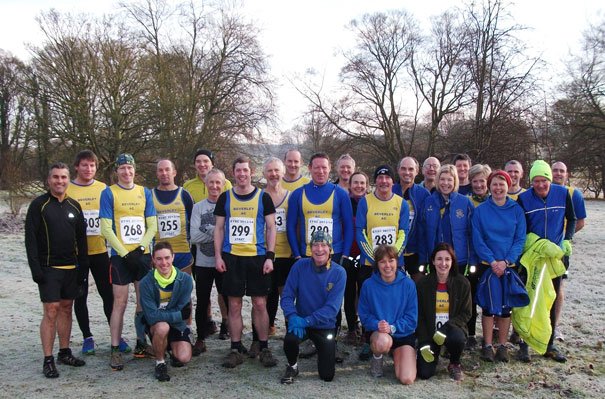 Beverley Athletic Club’s athletes had a cold and frosty start to their cross country race last Sunday. Held in the grounds of Sledmere House, this was the fourth race in the 2013/2014 East Yorkshire Cross Country League, and was organised by Driffield Striders.

The Sledmere course was new to the series last year, providing runners with a challenging but fast seven mile route consisting of two laps of the fields and woods adjacent to the house. Although the course lacks the steep climbs of most of the other races, there is a long slow drag up to the highest part of the course and a steep, windy descent through fields before the final climb to the finish line. 28 Beverley AC athletes completed the race, which included a total field of 167 runners from 8 local running clubs.

Beverley’s women took second place in the team event. They were led home by Laura Egan in 52:12. Egan was the 5th woman to finish. Her team mates were Emma Greensmith and Claire Traynor, who completed the race in 52:31 and 54:25 respectively. The overall winner of the women’s race was Nichola Jackson (City of Hull AC), who finished in 49:01.

In the men’s race, the winner was Chris Adams (also of City of Hull AC) who crossed the line in 42:45. Beverley’s men were third in the team event.

City of Hull AC made up the first men’s and women’s teams, and now appear to have an unassailable lead in this year’s League with just two races to go. The fifth race in the six-race series will be at Welton, on Sunday 9th February.