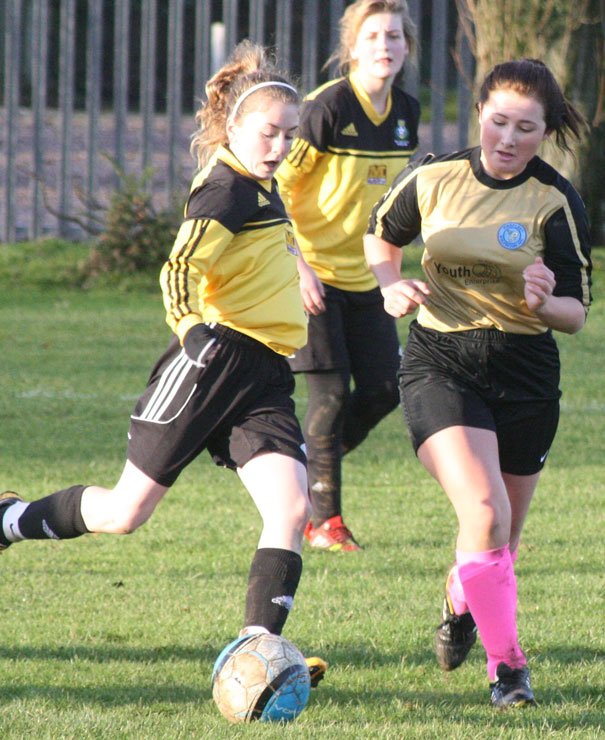 Previous meetings between these two teams have been dramatic, competitive, and entertaining so a good fixture was on the cards. The Mill Lane girls came to the match knowing that they would need to concentrate, and put in a strong performance, if they were going to take the three points that they needed to take top spot on a weekend when the league leaders did not have a match. However, they had been buoyed by their victory over the league leaders, their club-mates the Mill Lane Yellows, in a recent five-aside tournament.

As the away team Mill Lane lined up positively in an attacking formation, and indeed they started purposefully and pressed Pinefleet hard in the opening stages of the game. Soon after kick-off Millie O’Neill fed the ball to Courtney Fee who grazed the wrong side of the post from a tight angle out on the right. Mill Lane came close again when Keely Forward beat the offside trap only to see the keeper intercept the through ball as she sprinted off her line.

Generally, Mill Lane were taking time to adapt to the pitch, which was not in the best condition. Their movement wasn’t quite up to the normal standard, and the shooting wasn’t sharp enough to beat the excellent Pinefleet keeper. Pinefleet, who were playing very deep, handled the pitch better and were a constant threat on the break, putting the three player Mill Lane defence under pressure when they were able to cut through the opposition midfield.

The home side nearly opened the scoring when Mill Lane fumbled the ball in defence, due to energetic closing down by Pinefleet, who were chasing every loose ball, and Olivia Gaunt found herself one-on-one with the Mill Lane keeper. In this case, Emily Hood was quick to close down her opponent and made a super reflex save to deny Pinefleet. Unfortunately for Mill Lane the first goal followed soon after when Pinefleet’s Sophie Arnold found herself in space and looped the ball over Emily Hood in the Mill Lane goal.

In response to falling behind Mill Lane began to play with more urgency and fluidity. They came close to equalising when Emma Wray released the ball out of defence to set Courtney Osler loose down the left, from where she cut inside, skipped two defensive challenges, and broke through on goal. The move deserved a goal, but again Mill Lane were frustrated as the shot went just wide of the post. By now, the Mill Lane midfield were beginning to tip the balance of play in their team’s favour, and the breakthrough came when Emma Smith and Courtney Fee combined well to get behind the Pinefleet defence and provide Keely Forward with an easy knock-in.

The half finished all level, but the Mill Lane girls must have been disappointed to hear the half time whistle disrupt the initiative that they were beginning to build.

Mill Lane started the second half brightly but they were nearly undone when a Pinefleet counter-attack brought another good save from Emily Hood. Eventually, though the Mill Lane midfield wrestled back the advantage when Emma Smith carried the ball forward to the edge of the box and placed the ball inside the bottom corner of the Pinefleet goal. Smith rounded off her super performance when she turned provider, crossing the ball to Forward who scored her second goal of the match to secure the three points that took her team to the top of the league.

Mill Lane named Courtney Osler their player of the match for her constant involvement in a tough midfield battle between two determined teams.
Special mention should be made of Millie O’Neill, who eleven hours before kick-off was in the boxing ring in a competitive bout. Her team-mates, who had a late night at the Eastside Gym supporting Millie, all recognise the commitment she showed in playing at all. To put in the big performance that she did is even more remarkable.

Finally, another special mention is due for the entire Pinefleet squad, who are doing their bit for the community by collecting for a cancer charity, hence the bright pink socks that they wear. Three cheers for Pinefleet.