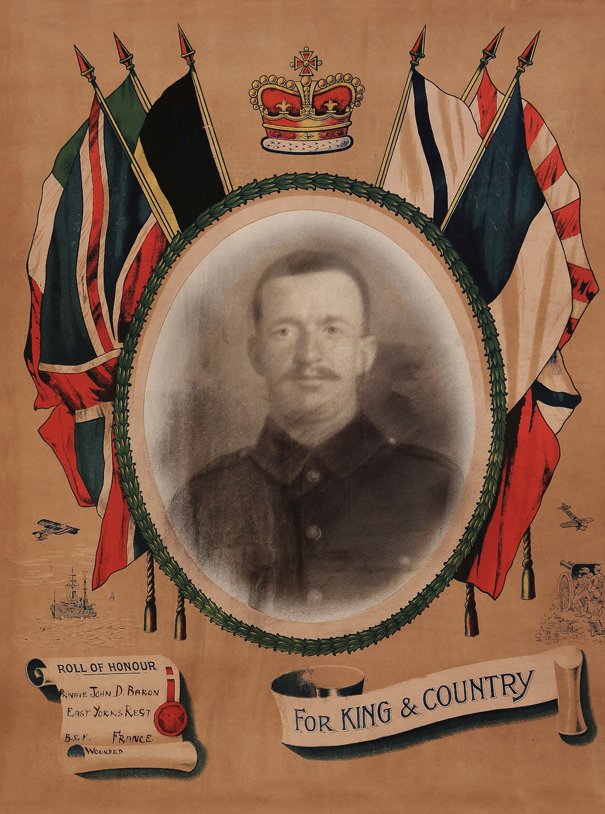 Our grandfather Private John Denson Baron, was part of Kitchener’s ‘New Army’ a member of the 12th Battalion, East Yorkshire Regiment (Sportsman’s, 3rd Hull Pals).1 He died in France on 3rd May 1917. The search for information relating to his death was triggered by our failure in January 2011 to locate his name on the WW1 roll of honour at Hull Holy Trinity Church. We were informed that it is not uncommon to discover that the records are incomplete. This is because the records were compiled after the First World War and relied on notification of the death from the next of kin. Our grandmother Mary died before she was able to add his name to these records leaving our mother and her four siblings as orphans. We provided information relating to our grandfathers death and proof that he was a Hull resident and his name has now been added to roll of honour.

After researching the Commonwealth War Graves website we were able to locate his service details and the location of his grave. Attempts to locate any other memorials have so far failed so we decided to visit his grave this year, at the Orchard Dump Cemetery, Arleux-En-Gohelle, not far from Oppy Wood. We, together with two other family members, are to the best of our knowledge, the first members of my late mother’s family to have visited her father’s resting place. The visit was very poignant bringing home to us the shear scale and the sacrifice and futility of war.

During the trip we also took the opportunity to visit other important places such as Vimy Ridge a Memorial dedicated to the Canadian Forces, Tyne Cot Cemetery and the In Flounders Museum. Finally one of the most moving experiences is the last post that’s played 8pm every evening at the Menin Gate in the honour and memory of the former soldiers of the British Empire and its Allies.