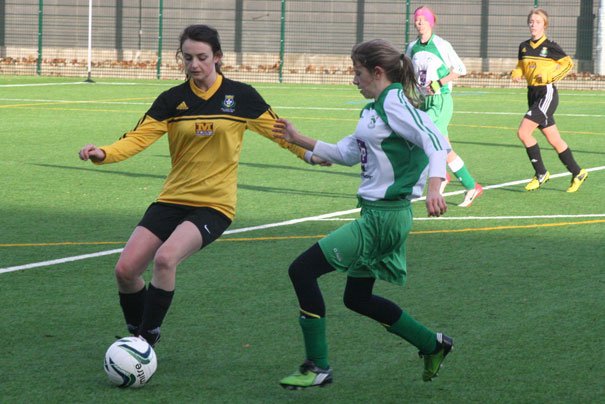 The last time North Ferriby met Mill Lane United they were soundly beaten, but there was no fear in their approach to this game.

The Ferriby team went straight on the offensive, with some wonderful pass and move play that stretched Mill Lane all over the pitch. The Mill Lane defenders were under a lot of pressure during these initial exchanges, but they looked composed and equal to the challenge, especially Chloe Bell and Chloe Johnstone who both went on to give outstanding overall performances.

Many of the North Ferriby attacks were immediately countered by breaks that built on excellent ball distribution from the Mill Lane defenders. It was one of these breaks that gave the home team the lead when Courtney Fee released the ball for Jodie Brown to convert.

With twenty minutes on the clock Brown got her second, a low angled drive into the bottom corner from a pin-point Emma Smith pass. Mill Lane added to their lead when Courtney Fee zipped the ball across the face of the goal, and Keely Forward, who was closely marked, instinctively stuck out a foot to score.

The half time whistle couldn’t come soon enough for the home team as North Ferriby were really upping their effort to try and get back in contention, and indeed they would have scored had it not been for Emily Hood, the Mill Lane keeper, who tipped a long range shot onto the crossbar.

At the start of the second half Emma Smith put the game out of reach when she surged through the Ferriby defence and took the Mill Lane lead to four from close in. The remainder of the game was more even, and Ferriby were able to grab a couple of consolation goals, but Lizzie Fitzgerald and Keely Forward made the points safe as they took the Mill Lane total to six goals.