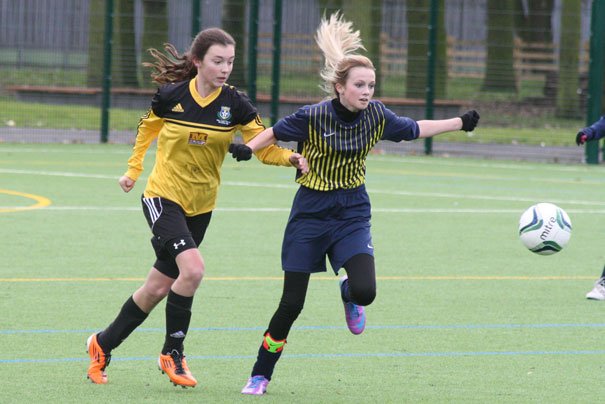 Malet Lambert and Mill Lane United, who were separated by a single league point going into their East Riding girls Football League encounter, fought it out in a match that was in the balance right up until the final whistle.

Mill Lane started cautiously and for the first ten minutes, Malet were able to enjoy a spell of midfield superiority, playing some positive attacking play and threatening to break through. Unfortunately, for the away team the Mill Lane defence, including on-form Chloe Bell and Chloe Johnstone, were equal to the task and the early Malet possession went unrewarded.

In a twenty-minute spell, the balance of the game swung towards the home team when they showed more intent, gained control of the midfield, and began to string together some cohesive passing play. Mill Lane midfielder Courtney Osler appeared at times to be involved in every move, and so it was fitting that it was she who broke the deadlock with an unstoppable shot from the edge of the box after receiving the ball from Emma Smith. It wasn’t long before it got worse for Malet when a crossed ball made it to the far post and was dispatched from close in by Keely Forward.

The away team will no doubt be grateful to their keeper who prevented Mill Lane from further extending their lead when, at full stretch she tipped a chipped effort over the bar from Jodie Brown.

The half finished with Mill Lane’s two-goal advantage intact, although the away team did have their chances, including one where Amy Knott attempted a looping shot from a tight angle that skimmed the top of the bar.

For the majority of the second half Mill Lane took hold of the fixture, displaying some great possession play, and a comfortable win looked to be on the cards. However, goals were not forthcoming thanks to stout Malet Lambert defending, and a slight lack of urgency in the final third of the field from the home team. Maybe luck played a part too, especially when Mill Lane captain, Courtney Fee, who was later named as the home team player of the match, shot from wide only to see her effort hit the crossbar.

The last ten minutes belonged to Malet. With nothing to lose, they threw everything into an effort to save the game. Initially, the Mill Lane defence looked calm under the pressure, especially substitute Hannah Smith, who gave a seasons best performance, but Malet sent wave after wave of attacks and began to look like getting back into the game. Robyn Allen was making no end of trouble down the wing, taking on players and threatening to break through the Mill Lane defence. However, still they held firm.

When Malet did eventually break through the defensive line, Emily Hood, the Mill Lane keeper, pulled off a great full length save that she steered away from the marauding Malet girls who were alert for the rebound. That should have been a warning to Mill Lane who went on to lose their clean-sheet to a similar parried shot that fell to a completely unchallenged Emily Warvill, who put her side back in the match.

Despite Malet making a frantic effort to level the game in the closing minutes, Mill Lane could hang on for a hard earned three points.