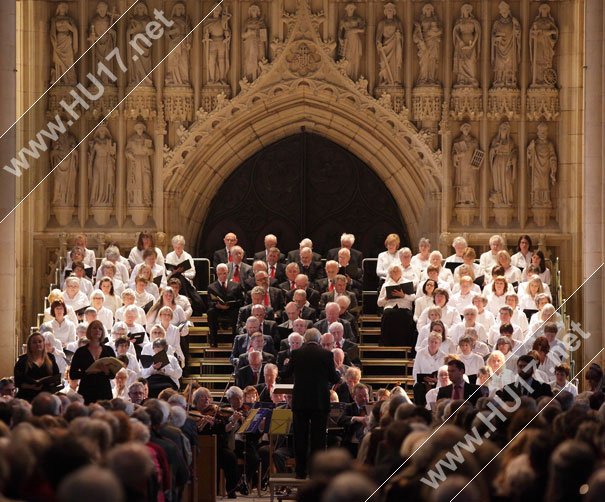 Slightly later than usual this year because of the Festival of Christmas, the East Riding County Choir will be performing Handel’s much-loved oratorio Messiah in Beverley Minster on Saturday 14 December.

Written in only three weeks, and receiving its premiere, in Dublin, in 1742, it is widely regarded as the finest of Handel’s great choral works. The County Choir performs Messiah every other year, and the choir’s history is intimately bound up with it, since it was out of a number of small choirs formed as part of Adult Education classes after the Second World War, who came together once a year to perform Messiah, that the County Choir itself was founded in 1957 (see attached programme!!)

The soloists for Messiah are Laurie Ashworth (soprano) Ben Williamson (counter tenor) Tyler Clarke (tenor) and Alexander Robin Baker (baritone) all of whom are established and much sought-after performers and recording artists.

The choir will be accompanied as usual by the East Riding Sinfonia, who will be led for this performance by Rachael England, and conducted by Dr. Alan Spedding.

This year the Choir has decided to perform Messiah in entirety (usually one or two of the choruses are omitted) which will mean there will only be a short interval, so that it will not be possible to serve coffee during it. The Minster can be rather chilly in December, so as well as wrapping up warm, the audience are recommended to revert to the practice of times past, and bring a hot drink in a thermos for the interval!

On-line booking is not available, for a small fee to cover postage, the Tourist Information Centre is able to take telephone bookings.