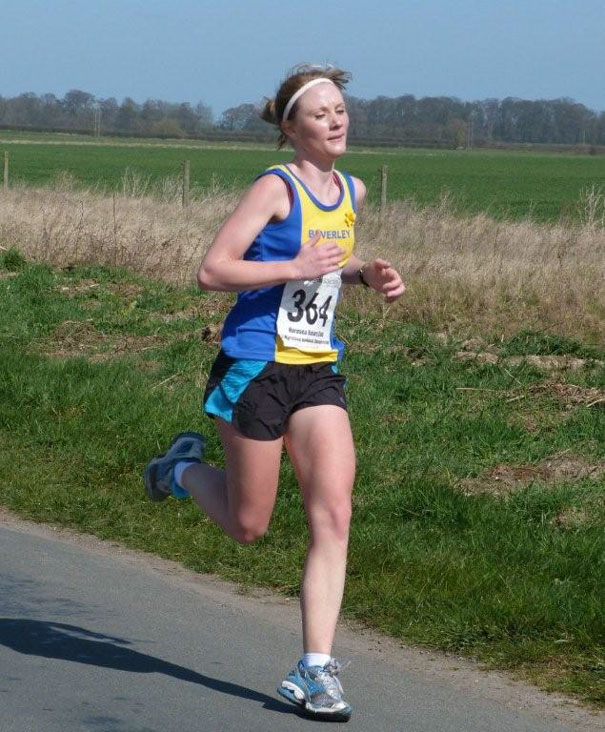 Last Sunday saw the second race in the 2013/2014 East Yorkshire Cross Country series, at Drewton Woods, near South Cave. The race is organised by Beverley AC. It covers a demanding and hilly six and a half miles, and with the first frosts and ice of the year was slippery in places. Conditions were excellent for cross country running, despite the chilly temperature the morning was sunny and clear. Beginning with a steep climb, the course ends with a flying finish to the line which is very tough on tired legs. 34 Beverley AC athletes completed the race, which included a total field of 202 runners.

Once again, Beverley’s Carla Stansfield was the clear winner of the women’s race and had a great run to finish in 45:14, 46 seconds ahead of second place Helen Cross of Pocklington Runners. Stansfield was 14th place overall in the race. She led the Beverley AC women’s team of three, which was fifth overall. The other two counters were Sam Allen and Emma Greensmith, who finished in 56:28 and 57:20 respectively.

Beverley’s men’s team improved on their fourth place in the previous race at Bishop Wilton, coming second at Drewton Woods. The team of six included two runners in the top ten finishers. Aubrey Morrell ran strongly to finish 3rd overall in 42:50. He was followed by Lewis Holloway who took 8th place in 43:55. The remaining four team places were taken by Luke Davison (46:07), Darren Rodmell (46:12), Darren Edge (47:38) and Phillip Reese (47:52). The winner of the men’s race was James Kraft (Scarborough AC) who finished in 41:31, while City of Hull AC men’s team took first place

The third race in the six-race series will be at Langdale End, on the North York Moors, on Sunday 15th December.

On the same day as the senior athletes were running at Drewton Woods, 20 of Beverley’s juniors took part in the Scunthorpe Open Cross-country races on a woodland course which included a challenging hill. The juniors put in their usual strong performance against tough competition. The Under 15 girls team and Under 17 boys team both won their respective events. The girls team consisted of Laura Duncan, Morgan Dennis and Eleanor Boyd, and the boys team comprised Harry Powell, Conor Spilsbury and Ethan Dalton, with Powell taking second place overall in his race. Nicole Dawson took 4th place overall in the senior women’s race, with Elizabeth Evans, Dayna Arnott and Francesca Brittain competing alongside her. Beverley also fielded a team of three in the Under 11 boys race, made up of Aidan Glover, Guy Hardbridge and Christopher Jeffs.