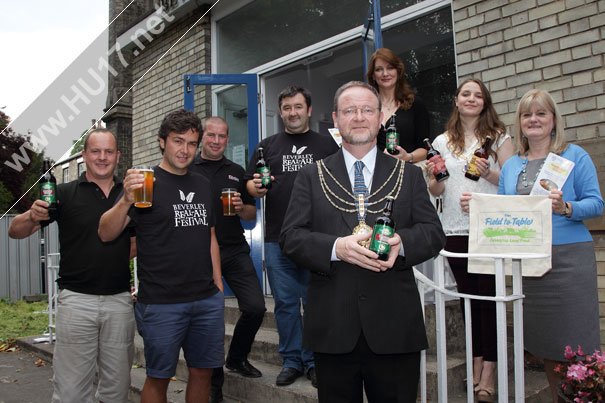 With a matter of days to go excitement is steadily building for the second Beverley Real Ale Festival.

Being held at the prestigious Beverley Memorial Hall the festival has yet again received huge interest with beer enthusiasts flocking into the town to sample a little under 80 beers and ciders at what is becoming one of Yorkshire’s most talked about real ale festivals.

Based upon this the festival opening night has sold out and festival organisers are expecting the non ticketed Saturday 5th and Sunday 6th to be very popular and members of the public are advised to get there early to avoid disappointment. As a result of this unprecedented interest for the event festival organiser James Harper has announced that there is now to be an additional festival session!

Loosely named the festival warm up session – Beer lovers will now have the opportunity to come along on Friday 4th in the afternoon 2.00pm -5. 30pm. This session is being priced at £3.00 on the door, but if you already have a ticket for the opening night, then simply bring it along and you can get in for free!

“Again we are blown away with the support and enthusiasm that Beverley has shown for our second festival.”

“Beverley is fast becoming one of the very best real ale destinations in the county, and this is thanks to the countless local pubs and bars like the Tiger Inn that have embraced this and now Beverley is firmly on the real ale map!”

“We know people are coming to the festival from all across the region which is great for the town and local economy and that fact that the opening-night sold out so quickly is just testament to the festival’s popularity.”

“We hope punters appreciate the additional Friday afternoon session – its more work for us but we don’t want people to miss out!
As already reported this year’s festival has teamed up with the Beverley Food Festival and organisers of both festivals are already seeing the benefits with big interest on the town’s food and drink extravaganza.”

One of the Bars at the Beer festival is being supported by Beverley Town Council with a focus on local produce.

All the beers on this bar will be local to our area and in addition to this, five rather special beers will be using local Yorkshire Hops grown here in East Yorkshire!

“We got to hear about Yorkshire Hops last year as Matthew and Chris were beginning to build-up their enterprise.”

“It is such an exciting venture that we were delighted to find that we could be involved through sponsorship.”

“So from the outset we’ve sponsored a row of Yorkshire hops. It’s been great to see the farm literally ‘grow’ and to learn more about where hops come from.”

“Ultimately, it is fantastic to be able to use Yorkshire-grown hops in our beers, alongside the Yorkshire water, malt and yeast.”

“We source hops from all over the world – so to be able to get them from down the road too is marvellous.”

“And it has been a real privilege to be some of the first brewers ever to brew with hops commercially grown in Yorkshire!”

The Beverley Real Ale Festival will be taking place over the weekend of the 4th, 5th and 6th of October with the Beverley Food Festival happening on the 6th.