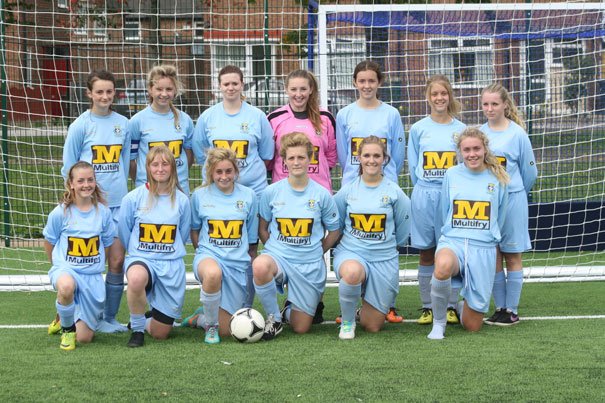 From the kick-off, the game started at a fast pace, with both teams showing attacking intent, and the match being open and end to end.

With five minutes on the clock, the away team opened the scoring after counter-attacking with impressive organisation and pace. For the first thirty minutes, the match remained close fought, as reflected in the score line which was two goals apiece after the opening exchanges.

However, it was the home team finished the half with a 3:2 lead after Emma Smith scored the second of the three goals that she eventually netted.

Soon after the second half got under way the home team extended their lead to 4:2 with a Millie O’Neill’s goal from a corner kick. Despite falling further behind Pinefleet showed great character and came back with purpose, scoring a fine third goal which was rifled into the top corner. However, as time went on the home team began to take control of the midfield and pressed forward with attack after attack.

Although the score line ended seven goals to three, the Pinefleet girls played a big part in the game, and they may well feel that they deserved a better outcome. Their keeper deserves a special mention for an impressive performance, making countless quality saves throughout the fixture.

The Mill Lane player of the match award went to Lizzy Fitzgerald, who has recently joined the team and is already making a strong contribution with her pace and sheer hard work. She was rewarded with her first goal for the team after bursting into a dangerous position and gratefully converting when a stinging Keely Forward shot was parried by the Pinefleet keeper.