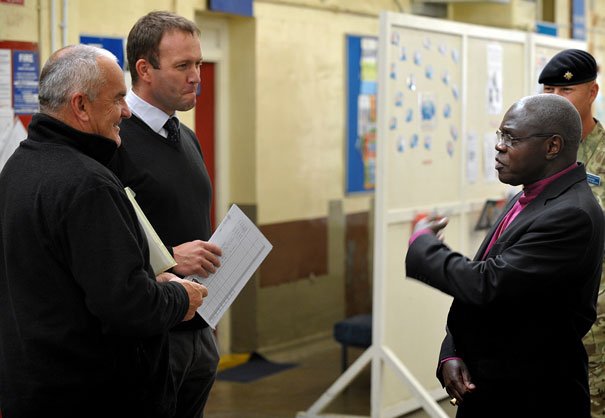 Learner drivers shared their experiences behind the wheel with the Archbishop of York when he visited the Defence School of Transport.

The Archbishop of York, the Most Reverend Dr John Sentamu, met the students from all three Armed Forces as they took a break from mastering all the skills they need to drive both military and civilian vehicles.

The Archbishop toured the challenging training area which includes steep hills, uneven ground and a simulated Afghan village. “I came here three years ago but then I didn’t go on a drive around the training area,” said Dr Sentamu. “This time I met some people who had just qualified and had just passed their driving test as well as others who were going to be deployed and it was good to be able to experience the terrain on which they train. “Those who passed their driving tests today told me that the training they have received is very good indeed.”

He also was shown the area where the military drivers practice night driving and expressed an aspiration to acquire new driving skills.

“If you go on the operational driving course the roads are narrow, the houses are very close and to pass that particular test you really have to be skilled. I think that this place offers some amazing training in character building, in driving, in camaraderie and they all feel as if they are all part of one very big family. I think that is wonderful and can only be created because the instructors, the commanders, the people that work here are determined it will that sort of a place.”

The Archbishop and members of his team were shown around by the Commandant of the Defence School of Transport, Colonel Rob Peacock and some of the instructors.

“It is a real honour and a privilege to have the Archbishop visit us – he is such an important man in the Church and for him to take an interest in what we are doing here is fantastic.” said Col Peacock.