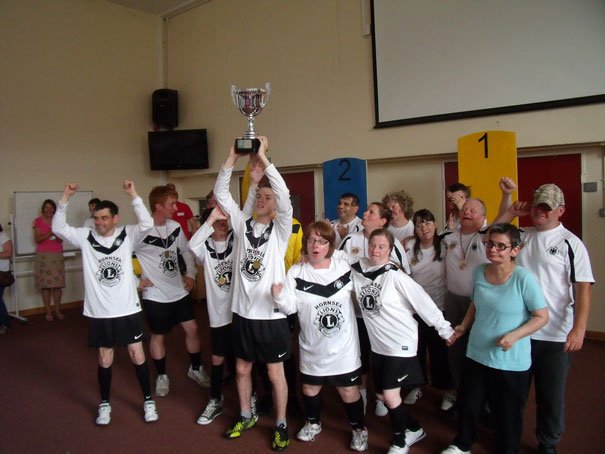 Priory View Day Centre has had a brilliant summer of sport – finishing top team in the legacy games in Beverley in July.

They competed against six other day centres and a combined team to win the big cup which sits proudly in the trophy cabinet at Priory View.

The team totalled a score of 30 points to win the title and their best accomplishment was the Athletics section, of which they scored the majority of their points.

Phil Henderson, Adam Simpson, Gareth Newby and Tom Langton won the Relay race. Tom was a superstar in the race coming from behind to win the race for Priory View and Gareth Newby, winning his sprint races easily, could be described as Usian Bolt.

Gary Musial surprised everybody by winning the ‘throwing the tennis ball’ seated event.

Gemma Jones won the silver medal in the Frisbee event as did Roz Burrell in the seated Frisbee throw.

Priory View defended their football title they won last year at Beverley and they retained the title.

A brilliant final match took place against Holderness with former Hull City player, Dean Windass, refereeing the match – which resulted in a score of 1-1 at full time.

Some of the Priory View competitors took part in the combined team event and finished 4th in the competition. The team included Debbie Firth, Gemma Jones and Phil Henderson, along with a couple of footballers from Beverley.

Competitors, supporters and staff were all invaluable on the day and fully enjoyed the event actively interacting with all the other teams.

Team leader, John Fortnum, was one of the main organisers and administrator, Emma Dean, worked very hard on the programmes for the games.

Twenty-one service users and 12 staff went to Sandal Park in Doncaster for the games organised by the Lions Club. It was a fantastic event with different activities from Basketball to Golf and unusual events like welly throwing.

The football competition – which was the main event – was won by Priory View, who also won all three of their matches fairly easily with scores of 5-0, 4-0 and 6-0.

The team consisted of T Langton, P Henderson, P Sadler, A Simpson, P Berriman, G Newby, A Hall and D Newton. This was a brilliant team performance and Paul Sadler is a fantastic footballer with great skill.

“It was a brilliant day organised by the Lions Clubs in Yorkshire who we would like to thank for such a terrifically organised event. To see so many disabled people enjoying themselves in sporting activities and all being given a medal is fantastic. Bridlington Lions have been so supportive of our centre. ”

“They provided us with a bus, and some people came from Swan House Day Centre on Victoria Road and seemed to enjoy their day. I would recommend the event to more disabled groups.”