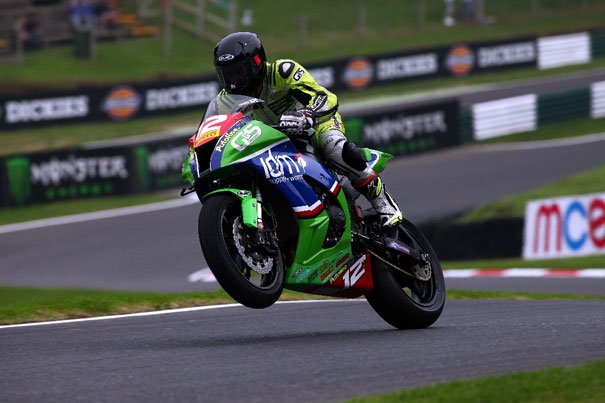 There were mixed feelings for Wyberton based G&S Racing Kawasaki at Cadwell at the weekend as all three riders put in a good performance which was marred by a nasty fall for Nottingham rider Daniel Hegarty causing his race to be red flagged.

The weather put paid to the free practice session as there was nothing to be gained from riding in the wet and slippery conditions on Friday morning, but all three riders went out on track in the afternoon for the first qualifying session once the weather had brightened somewhat.

Dominic Usher began his race in the Superstock 1000 class from a seventh row grid position and was soon mixing it with the mid fielders. He pushed forward picking up places and was running in 16th place and poised to move up a place and into a point scoring position when the red flag brought the race to an early end on lap nine of the planned 15.

“Although a bit disappointed I missed out on the points I am happy with my performance in the race. My lap times were faster than on previous visits to Cadwell and I felt comfortable on the bike. We were only two thirds of the way through the race and my tyre was beginning to show signs of wear so perhaps the red flag was a blessing in disguise!”

Mark Fisher-team manager was happy he said after the race

“I am well pleased with the performance of all three riders this weekend. We lost free practice because of the iffy weather conditions on Friday but the boys made up for that in qualifying by posting their fastest ever lap times. Tom did well to keep going after losing the knee slider, Dom was looking at a points finish if the race had continued and Dan was really unlucky to crash.

The next round is at Donington Park on September 8 but prior to that Tom and Dominic will take part in the Silverstone 200 race as part of the support package at the British Grand Prix at the weekend. This will allow Tom to ride the 1000cc bike to see how he goes and if it is the way to go for next year.