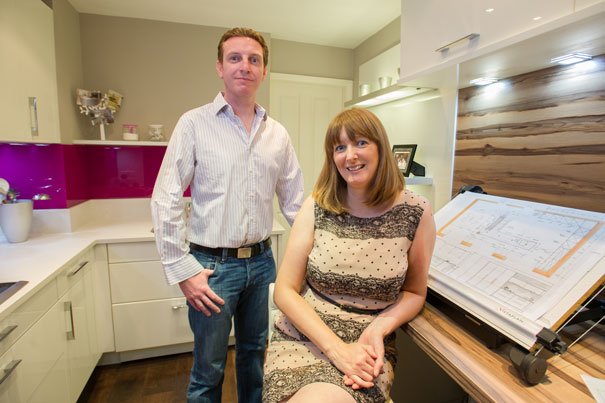 A known and respected Beverley kitchen designer has joined forces with a fellow franchisee to grow and develop her high street business.

Former cabinet maker and kitchen fitter, John McBride, has joined Anne Wallis who opened the In-toto Kitchens store in Beverley in 2000, bringing a combined 23 years of In-toto kitchen design and fitting expertise to the store on Hengate.

Together, the duo plan to grow the business by a 25% in two years and say the extra resource has doubled kitchen fittings in just three months.

“John brings a wealth of cabinet making and installation expertise into the Beverley store which is a fantastic complement to my design skills,” explains Anne who is a former kitchen and bathroom industry Young Designer of the Year.

“Our focus has always been on providing a personalised service to our customers as every project matters to our business. Our newly strengthened team means we now have more resource to meet the increasing demand from customers who are looking to improve and add value to their homes,” Anne added.

John, who is this year celebrating 10 years with the national In-toto Kitchens franchise, owns stores in Halifax and York.

With turnover amongst the trio of kitchen stores already 20% higher than forecast for the first six months of this year, John says business is on the up for independent retailers across the region.

“Throughout our three Yorkshire stores we are seeing a real change in attitudes as customer confidence increases and consumers start to look once again at home improvements. After joining Anne, we forecast that turnover amongst the three showrooms would to increase by approximately 33 per cent to June,” he adds. “But in fact we are up by 54 per cent which is down to more footfall across all three stores and our highest ever conversion rate from kitchen designs to kitchen installations.”

As part of the national In-toto Kitchens group – the UK’s leading fitted kitchen franchise which has 49 stores across the UK – John and Anne’s high street success story reflects the recent findings from the Business Factors Index which reports an increase in confidence amongst the region’s SMEs.

Anne adds: “There clearly has been a shift in the economy and while our business here in Beverley has been consistent over the last decade, our extended expertise combined with the quality of our In-toto German kitchen cabinetry means we expect our figures to grow by a further 10% to the end of 2013 – the strongest position we have ever been in since opening here in 2003.”