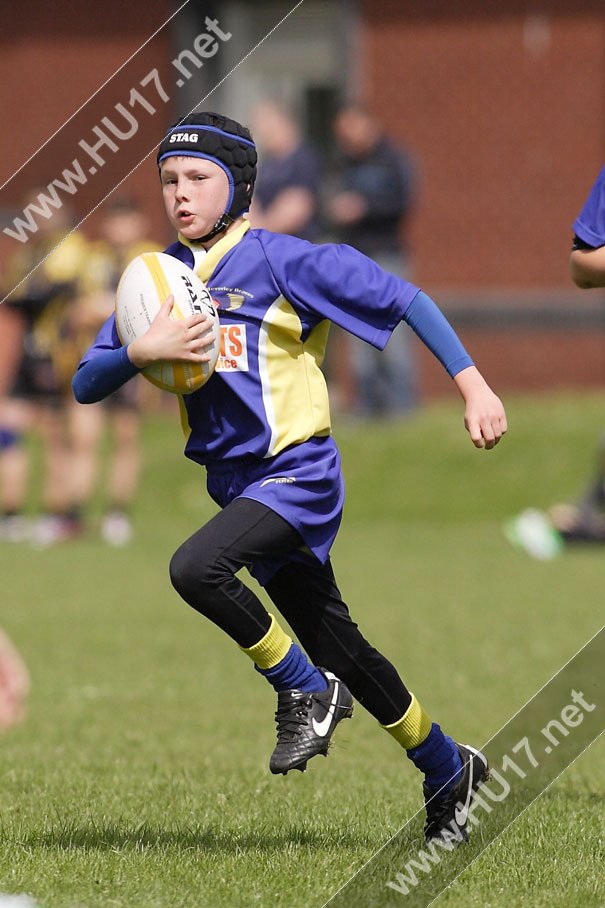 Beverley Braves under 11s lost to Hull Wyke by just two points in sweltering heat. A draw would who have been a fairer result as the two teams fought out a great game scoring four tries each.

Man of the match Ethan Rowbotham led the way for the Braves as top tackler and scoring a hat-trick of tries, but once again, it was a great team effort with everyone on the team contributing.

Beverley started the stronger and went close with several players, including Tom Marr, being held up just short before Rowbotham got the better of the Wyke defence to crash over from acting half-back. Marcus Walker added the extras, and it was 6nil to the Braves.

Wyke soon hit back and after the Braves lost possession on each of their next three sets, they needed no better invitation to take the lead, using the possession well to score twice and take a 6-12 lead. The under 11s have responded well to such set backs throughout the season and despite the heat, their defence started to close the gaps, and the handling errors were cut out letting them began to build pressure on the Wyke line.

Thomas Colley executed a great tackle to stop a Wyke attack down the right-wing whilst Ryan Deane enhanced his reputation in defence with another hard-working performance. George Bennet – Tere and Oliver Loney drove the ball up well, but the Wyke defence held on. From the subsequent handover, a crunching tackle from Thomas Cohen, and Walker put the Wyke player in to touch. From the resulting scrum, the position was set for Rowbotham to put in an arcing run to score in the right corner.
Walker, then cooly stepped up and converted from the touchline to make it 12all at half-time.

With the heat well in the high twenties it was important to rotate the forwards Will Sanford and Joseph Dennis joined the fray for the second half and worked really hard, particularly in defence where Dennis pulled off two try saving tackles. On the right-wing Oliver, Gresswell formed a useful partnership with William Wallis, and the Braves started to get on top again.

A storming run down the left from Henry Hughes took them deep into the Wyke half and when electing to run on the fifth tackle everybody’s heart was in their mouths until Wallis crashed over to claim his ninth try of the season to make is 16-12. Lewis Egan looked dangerous with the ball in hand, and his skilful runs caught out the Wyke defence several times, whilst he was once again high on the tackle count.

William Kirkup had a quiet game playing in the less familiar position of full-back and George Lees, despite some strong runs through the centre of the field could not find the gaps he often finds this week. Matthew Hutchinson had a steady game – it was not the best weather for the forwards to play rugby in.

Wyke got themselves back in the game scoring a converted try to put them two points ahead and after the Braves conceded a penalty when in possession of the ball, Wyke took full advantage to score a further try, which converted made it 16-24.

The Braves did not give up, and it was Rowbotham scooting in order to score his hat-trick, converted by Walker – his seventh consecutive successful conversion – that set up a close finish.