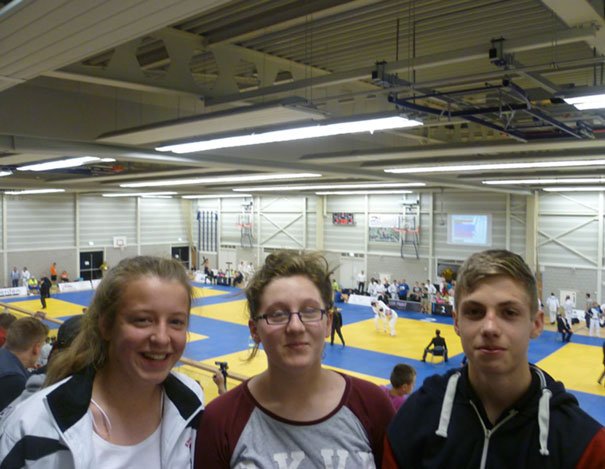 This premier event which attracted 1600 entries from 24 different countries was a tough test for the local athletes, nevertheless all three registered wins over foreign competitors despite each being in the lower ranges of their respective age bands.

Spencer was the shining light on this occasion coming back from a “Waz ari” down in her opening bout to battle through a succession of opponents from Holland, Germany and France to reach the bronze medal showdown. Unfortunately the medal rostrum was to elude Spencer as she suffered a defeat on accumulated penalties.

Bentham on her international début performed strongly against Dutch girls in her opening two encounters, one of which included a splendid “Ippon” match winning throw. This led to a contest with a literally towering German opponent who eventually claimed the win by way of completing a hold down for the allotted period.

Razzino, the 2011 British Champion, began his campaign in style defeating a top Belgian opponent, which avenged a previous competition defeat against the same player. However despite displaying some fine attacking judo in some gritty performances he too way eliminated before progressing to the medal stage.

Regardless of missing out on the medal positions all three will have gained some invaluable top level experience which can only assist in their long term progression in the sport.