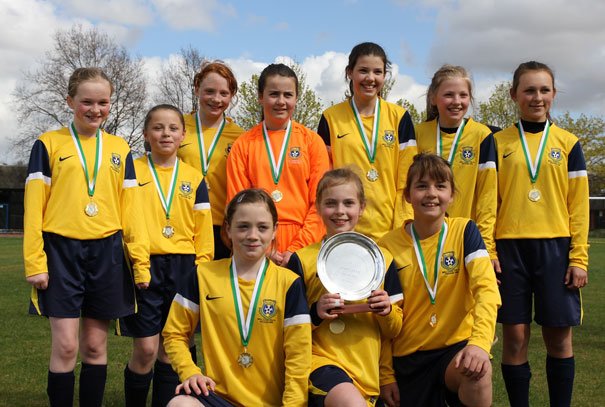 Mill Lane United Whites met their younger club mates Mill Lane United Blues in the final of the U12’s Plate competition. Having beaten Hornsea 4 – 1 in their semi final, the Blues were not about to let White’s physical advantage put them off.

The opening exchanges were keenly contested without any clear cut chances being created. Six minutes into the match White’s Evie Barrett opened the scoring with an accurate strike from the edge of the box. The opening goal was quickly followed up when Mollie Bligh and Hannah Winter combined to set up Evie Barrett for her second goal.

Blues quickly regrouped and stepped up the tempo of their play with Isobel Gillyon, Rebecca Long and Connie Forward working hard in midfield. Julia Colley came on to help out Whites midfield but the game didn’t see any further goals until 5 minutes before the break when Evie Barrett played a 1-2 with Winter before completing her hat-trick. Two minutes later Faye Marris shot from outside the penalty area to give Whites a 4-0 half time lead.

Following a quiet start to the second half Mollie Bligh increased Whites lead with a clinical finish. It wasn’t all one way traffic though as the Blues enjoyed some good possession, but found creating chances hard going with Whites keeper Olivia Westcott being well protected by defenders Annabel Laughton and Ella Parker.

Both teams can be credited with playing some good football, but it was Whites who came out on top winning the East Riding U12’s girls Plate competition.