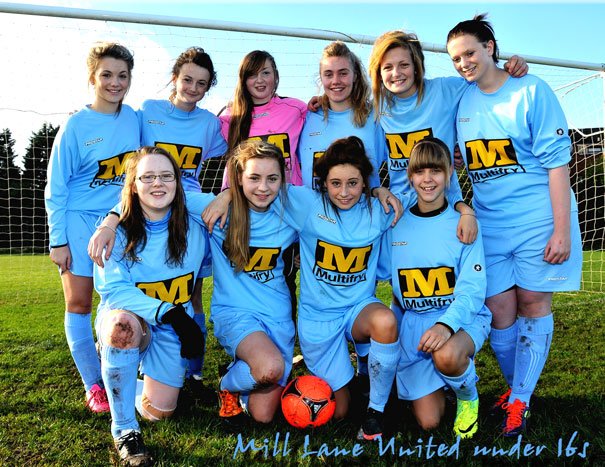 Mill Lane United showed real attacking intent from the moment the whistle blew, with surging runs through the middle onto some accurate passes from midfield. However Pinefleet played a high line and worked the offside trap intelligently, more often than not frustrating the attacks of the away team. It wasn’t long though before Keely Forward broke the offside trap and put the Mill Lane United girls into the lead.

Once they had taken the lead Mill Lane United seemed to lose some of their urgency and the home side began to take the initiative.

For the remainder of the half the ten Pinefleet girls made the midfield their own and controlled the pace of the game, drawing Mill Lane United into a physical battle that they were struggling to cope with. The match was being played mostly in the Mill Lane United half and the home team were rewarded for the relentless pressure that they were applying with three well deserved goals.

Despite being on the back foot for much of the half the away team carried a threat whenever they gained possession. Indeed they could conceivably have gone to the half time break on level terms had it not been for the woodwork and some excellent last ditch defending from the home team.

As it was the half ended 3 goals to 1. The home team deserved their lead because frankly they had taken charge of the match. The away team had to change their game-plan or they were in danger of being swept aside.

The second half started like the first with Mill Lane United applying the early pressure but this time it was fruitless. A Pinefleet break down the right wing released the ball to their number 4, who took an excellent goal from around 30 yards out. This took the score to 4:1and very soon afterwards it got worse for the away team when the 5th Pinefleet goal went in with about 30 minutes left on the clock.

With the score at 5:1 Mill Lane United looked like they had little to play for but pride. But they did begin to play and now they were really upping the pace and moving the ball about well. They were soon rewarded when they got in behind the Pinefleet defence and released Keely Forward for her second goal.

Click Here
Five Sporting Stars Who Have Come Out Of Beverley

Pinefleet had other ideas though. From the re-start they went straight on the offensive, won a corner, and scored their 6th goal directly from it. Mill Lane United were back to 4 goals adrift with only 20 minutes remaining.

What happened next was stunning. Mill Lane United simply went on the rampage. Having noticed that Pinefleet were tiring, Mill Lane United upped the pace and pressed for every ball, giving the home team no opportunity to sit back and defend their lead. The superiority that Pinefleet had shown earlier in the game was more than matched by Mill Lane United in the final minutes. Their pace, passing and vision meant that they were in complete control, and every attack looked like turning into a goal.
In the final 20 minutes Mill Lane United’s dominance was rewarded with 5 goals that won them all 3 points and left the opposition reeling.

If ever a game deserved a draw this was probably it, but on the day it was the movement and pace of the away team that prevailed over the physical dominance and excellent tactics of the home team.

The Mill Lane United player of the match award was presented to Courtney Fee for her exceptional workrate throughout the game.