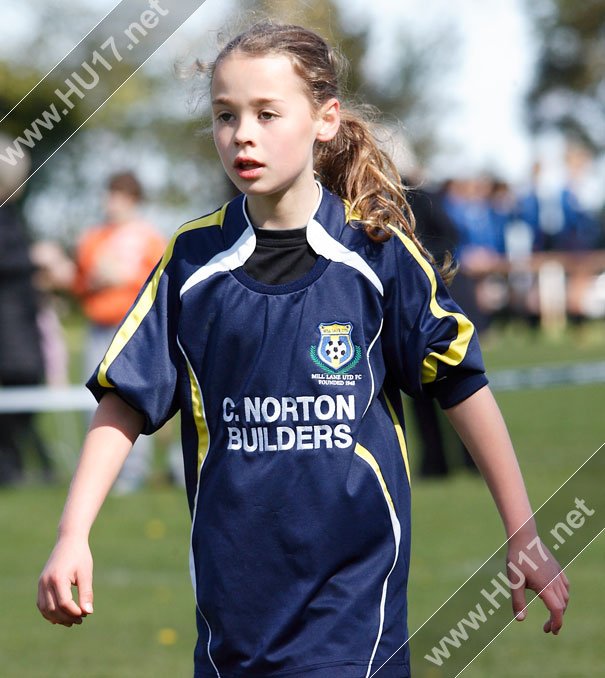 Mill Lane United Whites went into this East Riding Girls Football League match without a recognised goalkeeper and no substitutes, but were not about to let that get in the way of their title aspirations.

Hessle were also clearly up for the challenge of the game with some strong tackling and always applying pressure on the player in possession.

Mollie Bligh was the first of four Mill Lane players to put on the Keeper’s jersey and was called into action early on diving at the feet of a Hessle striker to claim the ball. Mill Lane made the breakthrough when Lily Andrew Price split Hessle’s defence with a pass to Hannah Winter who made no mistake with the finish. Mill Lane took control of the match as they pressed forward looking to increase their advantage.

Lily Andrew Price went close with an excellent run to the near post and flicked the ball towards goal only to see her effort cleared off the line. Mill Lane pressure was rewarded 5 minutes before the break when Winter charged down a Hessle clearance and player of the match Mollie Bligh ran onto the rebound coolly slotting the ball past the advancing keeper.

Hessle picked up their game in the second half and 6 minutes after the re-start proved they were a threat on the counter attack when a well hit shot reduced the deficit to 2-1. As Hessle tried to get back on level terms Mill Lane defenders, Annabel Laughton and Ella Parker, were called upon on a number of occasions to make timely tackles to break up Hessle attacks.

Lane’s midfield of Faye Marris, Evie Barrett, Mollie Bligh and Julia Colley were made to work hard to keep possession of the ball. Lane went close again when Hope Barrett’s corner was met with a powerful header from Evie Barrett with the keeper rooted to the ground the ball was just inches over the bar.

Mill Lane regained their two goal lead when the ball came to Juila Colley in a crowded penalty area, Colley’s first time shot found its way through the defence and into the corner of the goal.

Just when it looked as though Mill Lane were going to see out a comfortable win with 5 minutes left Hessle scored again with a bullet of a shot to create a tense last few minutes. Mill Lane did see the game out and took all three points with a 3-2 victory.