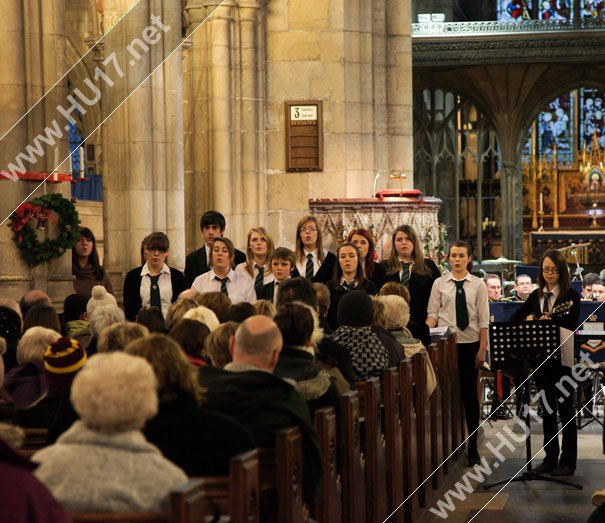 Longcroft School has joined forces with one the country’s oldest military charity, to organise a fundraising Christmas concert at Saint Mary’s Church in Beverley.

The Soldiers, Sailors, Airman and Families Association (SSAFA) can trace its routes back to 1885 and supports members of the armed forces and their families. The East Riding branch’s annual “Celebration of Christmas” has become a local highlight on the festive calendar and it is hoped that more people than ever before will join in with this year’s event.

David Elvidge, SSAFA East Riding Chairman, explained why the group was working with the school at this special time of the year: “It is great to be working with Longcroft again – the school has had links with forces families for decades, with many children coming from Leconfield Camp and the Defence School of Transport. It also has an excellent reputation for supporting community events and excels in the Performing Arts. It’s also wonderful to involve Saint Mary’s and Saint Nicholas Primary School choirs, as we really want this to be an event the whole family can enjoy.”

The ‘Celebration of Christmas’ will include music from the three schools, festive readings, carols the whole audience can join in with and a special appearance by the Humberside Police Concert Band.

Mr Elvidge said he felt this this was a great way for people get into the festive spirit, whilst also remembering members of the Armed Forces who are away from home: “Many forces families will have loved ones currently stationed half a world away. They may be on peacekeeping missions, part of humanitarian efforts or in combat zones – wherever they are, the one thing they have in common is being away from home at a time of the year when everything centres around the family. Although this will be a lively and joyful event, it gives the community an opportunity to come together and share a joint celebration of Christmas, whilst remembering those who won’t be home in time for the festivities.”

Ian O’Donnell, Longcroft’s Headteacher, said he was delighted for the school to be involved: “I am always very proud of our students, especially when they volunteer to support community projects of this kind. This is the second time we have worked in partnership with SSAFA to organise a concert and we hope that everyone who attends enjoys celebrating Christmas, whilst keeping in mind the important work the charity carries out throughout the year.”

A highlight of the event will be a set of performances by the Humberside Police Concert Band, who are well known for their musical expertise. Mr Elvidge added: “We are very lucky to have the band supporting us and I know the audience is going to be in for a treat. It’s also a great experience for the pupils from St Nicholas and St Mary’s, who get to sit directly in front of the musicians and see the band close up. I hope the combination of the band, the choirs from the two primary schools and the Longcroft Chamber Choir will make it an event to remember.”

The event starts at 5:30pm on Saturday 8th December 2012 in Saint Mary’s Church, Beverley. Civic dignitaries will be in attendance and entry is free, but donations towards the work of SSAFA will be warmly received.

Mr Elvidge concluded: “This is a great community event and we have a lot of people to thank – from St Mary’s Church for allowing us to use the building, to all the performers who will be taking part. I hope as many people as possible will turn out, support our Armed Forces personnel and enjoy this start to the Christmas season.”