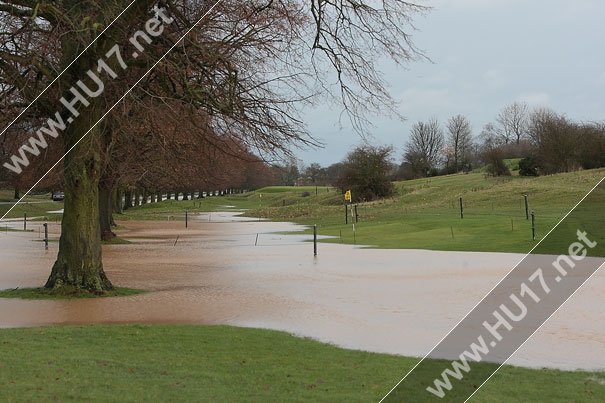 Homeowners in the centre of Beverley were bracing themselves for more misery as flood water flowed into the town this morning.

A night of torrential rain has turned parts of the Westwood into a tumbling river, with water flowing down Beverley Golf Course and forming a huge lake – ironically where flood defences are currently being built near Pasture Terrace.

It brought back memories of the floods of 2007, when Beverley and the East Riding were submerged in the worst flooding in living memories.
While the current level of flooding is nothing like as severe, any further rain looked likely to cause water levels to rise – meaning more misery for residents.

Local businessman Phil Scaife, of Ladygate Removals, contacted HU17.net to say his van was bogged down near Pasture Terrace.

He recalled memories of the fateful floods of just five years ago and said: “This is unreal – who would have thought this could happen on such a scale again as so much time and effort has been put into ensuring this didn’t happen again.”

Curious locals refused to give up their daily walk, staring quizzically at the raging river – nicknamed the River Westwood – and taking the time to record the event on mobile phones.

Roy the well known owner of Roy’s Sandwich Bar, remained upbeat despite being forced to pull his trailor from the flooded Westwood.

He said: “I thought it would be business as usual, but even I have had to give in today.

“It’s been raining all morning and it’s no surprise this has happened with all the rain that’s been falling overnight.

Have you got any pictures of the new floods? Send them to u2us@hu17.net for publication.