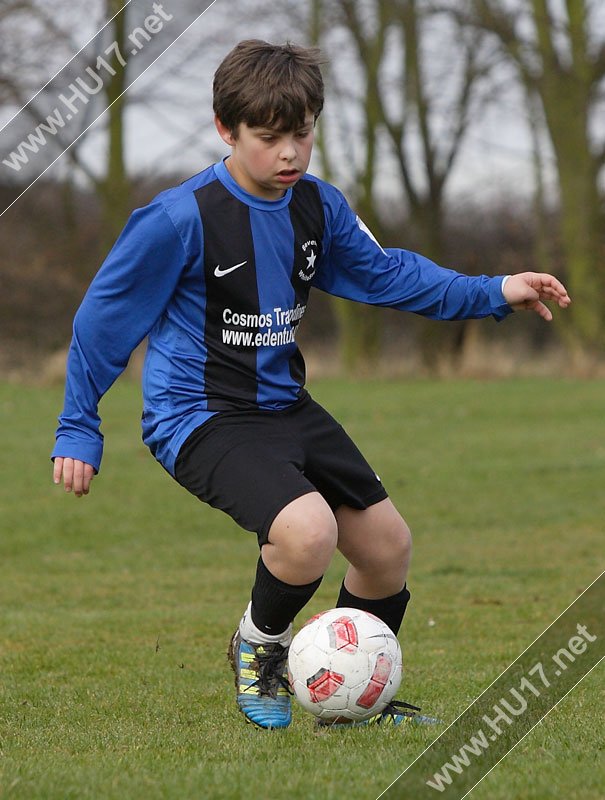 Springhead entertained Beverley Whitestar Rams in the second round of the U14 Knock Out Cup.

Following heavy rain the pitch condition was heavy and both teams had to concentrate to keep possession in the early part of the game. Spartans started the better and caused Beverley trouble with well worked counter attacks.

A well organised defence for Beverley spearheaded by James Beevers and Dennis Bailey snuffed out the Springhead threat. Beverley gained in composure and started to rip up the midfield with Jordan Weatherill and Liam Lawson holding up the ball well working it to the flanks for Charlie Rowbotham and Max Hollaway to feed from.

Beverley scored when Beevers worked a cross box ball for the lively Hollaway, who slotted home past the keeper. Beverley were then strong in possession and got Dan Baillie and Ollie Baldwin into the game creating chances from the edge of the box. From a good run by Beverley’s Baillie, he forced a corner which Charlie Rowbotham struck home for two nil.

Springhead rallied and worked the Beverley back four on numerous occasions rams James Weldon or keeper Lewis Richardson had to be on guard. Half time 2 nil.
The second half was a different story, and Beverley took command held possession and were able to add strength further on the pitch with Joe Wilson and Elliot Gilmartin.

From a loose ball, Beverley’s Joe Wilson struck a great volley that dipped over the well positioned keeper for three nil.

Soon after Beverley’s Ben Hearfield, who worked tirelessly on the wing, cut inside and squared a great ball for Baldwin to glance home.

This goal was interspaced with two great breakaway goals for Spartans, who gained in confidence as they were able to break down Beverley with good passing.
Beverley forced a corner and when the loose ball came back to Weatherill, he hit a first-time volley from far out the area into the net from an angle.

As the game drew to a close Spartans heads did not fall. Beverley closed the game with further goals from Max Hollaway and Ollie Baldwin whose goal beat the advancing keeper with a clever cut back.