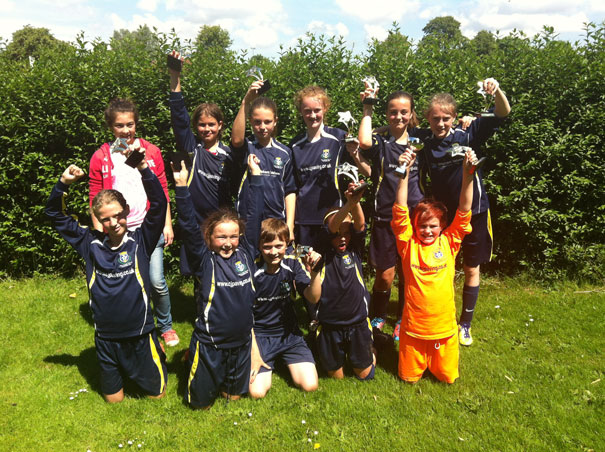 Due to the number of teams in the competition it was agreed that all the teams would play each other twice, with the top two meeting in the final.

Mill Lane United’s first game was against league runners up Hessle Town and in a tight match a moment of brilliance by Amy Dodds down the left wing resulted in a pin point cross to the rampaging Abbie Longley in the penalty area, who showed real class side footing her volley into the back of the net to ensure a well-earned 1.0 victory.

The second game against Costello was more comfortable as Millie Sharp and Natalie Bell fired the side into an early lead, with Substitute Caitlin Purcell notching two more for a final score line of 4.0.

The third group game was a much tougher prospect as the Players Development Centre (PDC) (formally Girls Centre of Excellence) played a strong side against the ERGFL Champions. In a match where no quarter was expected or give, Mill Lane United arguably edged it in terms of possession, with the PDC creating the best opening only to be denied by a superb save from Jessica Wright, resulting in a tight 0.0 draw.

The second round of matches once more saw Mill Lane United beat Hessle 1.0 thanks to a Millie Sharp strike in the dying seconds and another 4.0 victory over Costello with Millie netting a brace along with Amy Dodds and Abbie Longley also finding the net. Therefore with the tournament running behind schedule and the top two already decided it was decided to proceed straight to the final with Mill Lane United playing the PDC.

In an improved team performance built on the solid defensive partnership of Olivia Nassau and Skie Wyatt, Mill Lane United started strongly pushing the PDC back into their half and dominating territory and possession, eventually the pressure told as a well worked short corner by Amy Dodds and Olivia Nassau saw the latter free in front of goal and her scuffed shot somehow stayed out only for Natalie Bell to bundle the ball over the line for the crucial lead.

In fairness to the PDC the goal spurred them to life and they had the better of the first half without creating a clear opening. The second half once more saw both teams flying in to tackles in a great exhibition of girls football with Millie Sharp, Abbie Longley and Grace Fletcher clearly pumped up for the occasion.

The remaining minutes saw neither team create any clear cut scoring opportunities, resulting in a final score-line of 1.0 to Mill Lane United. Afterwards, Mill Lane United rightly celebrated a well-earned victory in a tournament in which they hadn’t conceded a single goal and were the highest scorers.

Therefore, after six tournaments in nine weeks, travelling in excess of a 1000 miles Mill Lane United finally ended their summer tour winning an unprecedented nine trophies over the course of the season. With today’s victory over the PDC cementing their position not just as the area’s number one girls team, but arguably the whole of Northern England.